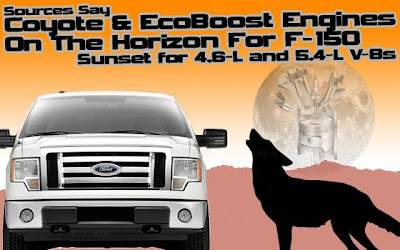 According to PickupTrucks.com sources, Ford is planning big changes to the F-150's powertrain lineup in 2010 for the 2011 model year, focused on giving buyers more power and greater efficiency.

By late 2010, the new standard engine for the F-150 will be a 5.0-liter, modular, four-valve, naturally aspirated V-8, developed under the code name "coyote." This eight-cylinder engine (described as having "huge heads") will be shared with the new Ford Mustang. Power figures are said to be approximately 400 horsepower and 400 pounds-feet of torque. Fuel economy is expected to be comparable to the current 5.4-liter engine.

In an interesting reversal of tradition for trucks, the premium engine for the light-duty F-150 will be a V-6. The new rear-wheel-drive version of the 3.5-liter, six-cylinder EcoBoost gasoline turbo direct-injection motor will occupy the top slot. Ford has officially said the EcoBoost engine will arrive next year with improved fuel economy and low-end torque with a broad, diesel-like torque curve through most of its power band. Our sources say it too will be rated at approximately 400 hp and more than 400 pounds-feet of torque. Gas mileage is expected to be at least 23 mpg on the highway.