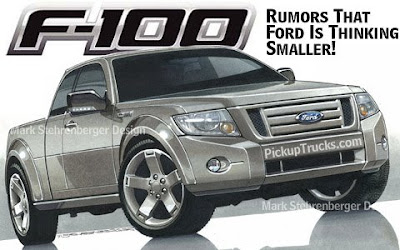 With oil prices and Corporate Average Fuel Economy (CAFE) standards rapidly rising and the Ford Ranger compact on its last legs, a 'baby' F-Series pickup may be about to join Ford's best selling truck family. On and offline sources are whispering that the all new Ford F-100 mid-size hauler will arrive by 2011, slotted below the F-150 half-ton.

In March we hinted this move was coming, when we described how, "weight savings and manufacturing flexibility," will be key to the success of the next-gen 2012 Ford F-150. That's because the F-100 is expected to share a modified version of the future F-150's body-on-frame platform.

Nissan pioneered a similar approach building big and small trucks off of its 'F-Alpha' platform. F-Alpha underpins both the full-size Titan and mid-size Frontier pickups, as well as Nissan's full and mid-size SUVs.

There are several advantages to a shared platform strategy. Ford can save development time and costs by sharing major components, like frame and powertrain parts, between trucks. Today's Ford Ranger and F-150 pickups share almost nothing in common. It's also expected that the F-100 and F-150 will roll down the same assembly line at Ford's Dearborn Truck Plant, so Ford can efficiently adjust its product mix according to customer demand.

Weight savings should be substantial compared to the current F-150. In addition to its smaller size, the F-100 (and future F-150) is expected to use thinner gauge, higher strength steel in its frame rails and cross members while aluminum will be used to remove pounds from the hood and lift gate.

Engine choices are said to include naturally aspirated and 'EcoBoost' twin turbo gasoline direct injection V6 engines and one V8 gas motor. We're also hoping Ford offers its 2010 4.4-liter light duty diesel V8 as an option. The engine mix will be critical as Ford seeks to meet 2015's 28.6 miles-per-gallon CAFE target for light duty trucks that was recently established by the federal government.

Since Ford groups sales of its F-150 with the F-250, F-350 and F-450 (equipped with a pickup box) Super Duty pickups under a single F-Series bucket each month, it will be interesting to see if the F-100 is pulled into this group too. Technically, the F-100 will have much more in common with the F-150 than an F-150 has with Ford's Super Dutys.

The F-100 badge hasn't been used on a Ford pickup since 1983, but with fuel prices continuing to rise, and Ford hurting for a modern mid-size truck, it can't arrive soon enough.

For further reading, it appears the staff at Autosavant have heard similar information about the F-100 from their sources. They also have speculative news about the ultimate fate of the Ford Ranger.
Posted by Pw3680 at 12:36 PM No comments: