I'm an expert parallel parker. I learned all the tricks by street-parking a 19-foot '73 Chevy wagon with battlestar bumpers in college. My favorite: shove the Ford Fiesta in front of you forward until you feel him touch the car in front, then back up a half inch. I have never once, in real life, parked a Lexus using its Advanced Parking Guidance System. I don't have the patience for all that fiddly on-screen programming. Ford claims to have developed a system that will delight us impatient gadget-geeks as much as it does the parking-challenged.

When you enter fertile ground for parallel parking spots, you simply slow down and tell the system to start looking for a spot (it'll look to the left or right). Ultrasonic sensors measure the distance to the curb and between parked cars or obstacles. When it sees a spot that's big enough for a simple back-in-pull-forward parking job it signals the driver to stop and accept the system's assistance to park (it's going to pass up the 29-point squeeze jobs I used to wedge the shaggin' wagon into). 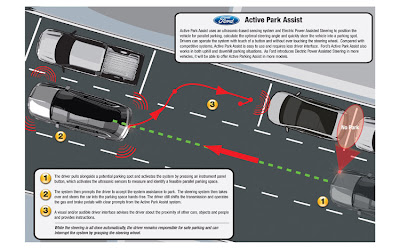 The driver works the shifter and pedals under the guidance of Active Park Assist, which takes full control of the steering, using the electric power assist system (which boosts fuel economy by about 5 percent and hence will become standard on almost 90 percent of Ford, Lincoln, and Mercury vehicles by 2012, greatly increasing the number of cars that could be fitted with APA). It sounds like a quick and easy system that I'd use on occasion -- you know, whenever the drive in, bump up onto the curb and drop down into the space technique looks unworkable.