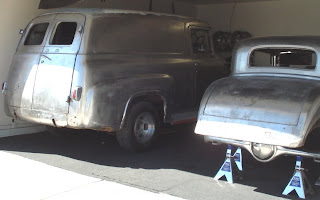 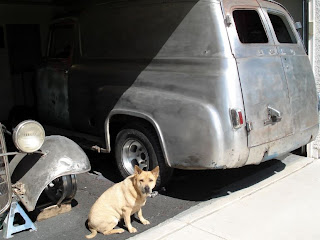 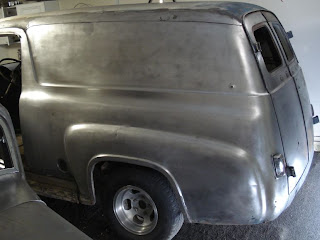 I've always liked '56 Ford F-100 pickups and panel trucks. After keeping an eye out for an affordable, straight, solid '56 F-100 panel truck project for many years, I grabbed this one as soon as I found it.

Here's how the truck looks now. This picture will be replaced whenever there's a significant change.

At the end of April, 2007, we brought the truck home and rolled it into the garage to finally start working on it.

After going over them with paint stripper, a razor blade, and a D/A sander, the front fenders and the entire outside of the body except for the roof are now in bare metal.

The condition of the body is amazing. There wasn't any body filler anywhere on the truck. There are no dents anywhere on it that are deeper than an eighth of an inch, and the amount of rust damage totals up to less than one square inch. This truck is a survivor. 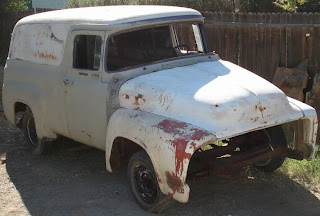 For this picture, a pair of fenders and a hood from another truck were set in place without being bolted down.

It turns out that one of the reasons the body of the truck is so well-preserved is because decades ago, it was painted with a thick coat of house paint. 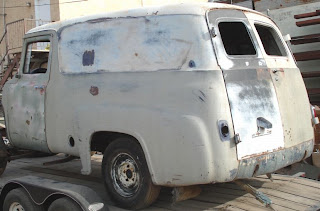 Here it is sitting on the race car trailer, ready to pulled out of where it had sat for decades.

At one time the truck had a roof rack bolted on, so each side of the roof has two pairs of eighth-inch holes that will need to be filled. A pair of extra taillights had been mounted on the sides of the body, leaving a pair of 3/8-inch holes to be filled.

Other than that, the truck has never been butchered, hit, or rusted. The paint may be rough, but the body is surprisingly straight. Realistically speaking, this is a great starting point. 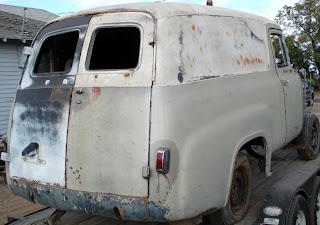 When a '53-'56 Ford panel truck comes up for sale, it usually falls into one of two categories. Sometimes it will be an old, worn-out work truck that has sat outside for most of its life and rusted-out. It's more common to be something expensive that's been rebuilt and street-rodded with a lot of parts that you wouldn't have used and don't want, and a paint job that hides the real condition of the sheet metal. 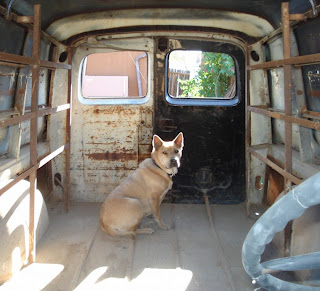 This '56 F-100 panel truck was built in San Jose, California. It left the factory with a 272-inch V-8, the optional Custom Cab trim, and dark blue paint.

It has spent its whole life in Arizona, and was used as a plumber's shop truck.

On the inside, racks for shelves had been welded on each side. I took this picture before I carefully cut them out and cleaned the inside with a pressure washer.

In the 1970s, a hot rodder here in Phoenix bought it, cleaned the frame, installed a 454 and a Turbo 400, and then pulled them out and set the truck aside to work on other projects.

The rear pan is fairly straight and really solid.

The previous owner told me that in all the time he owned the truck, he had never opened the back doors because the latches were frozen. I sprayed them with Gibbs Brand to free them up. This picture was taken after the back doors were opened for the first time in decades.

The rare, cherry '53-'56 panel truck rear bumper is fresh from the chrome shop. In January I found a set of mounting brackets for it. 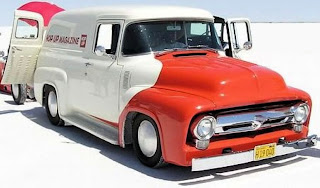 Mark Morton's '56 panel is a lot like what I want to end up with. Shown above parked on the Bonneville Salt Flats, Mark's panel has a big block Chevy 427, and it runs great pulling a loaded race car trailer on the highway.

For this one, I've already set aside a lot of parts, including a healthy Chevy 454, several '57-64 Olds rear ends, a set of NOS 1960s Stewart Warner gauges, some neat old aluminum wheels, and an original '56 F-100 axle that I've polished.

As work progresses on the panel project I'll keep adding current pictures of it here.

So far, I've only had time to work on the truck for a few afternoons. Since most of these pictures were taken, I've cleaned the interior with a pressure washer, removed the racks from the inside, cleaned and detailed a lot of small parts, and sanded the front fenders down to bare metal so they're ready to have a few dents removed. Sanding the hood will come next.

At some point we're going to have to lift the body off the chassis so we can sandblast and box the frame.

After every part has been detailed and everything is assembled with the bare metal body protected by Gibbs Brand, the truck will head to my friend Cole Foster's shop in California for some minor bodywork. 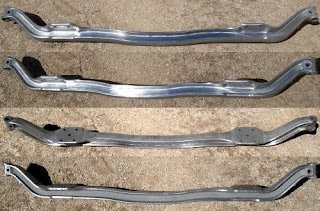 Several years ago, having decided that I was going to build up a '56 panel when I found the right one, I bought this original '56 F-100 axle.

This picture shows four views of the axle after I partially polished it with abrasives, before it was dropped.

Below is the same axle after it was dropped three inches, with a stock '56 axle beneath it.

When you're building classic F-100 into a hot rod truck, there are lots of choices when it comes to front ends. Some people (especially people who sell parts for a living) will tell you that a good way to go is to scrap the original front end and replace it with a custom-built front crossmember and the suspension out a Volare or a Dodge Dakota, or even a Mustang II. Those conversions often add new problems.

Although this truck is going to look good and run well, it's always going to be a truck. That calls for a strong, reliable front end that doesn't go out of alignment or sag, and something that parts will always be available for.

After the chassis is stripped down, the frame rails will be boxed to minimize body flex. The '53-'56 F-100 panel truck frames are essentially identical to the frames for the pickups, and when the pickups were designed, frame flex was engineered into them to provide additional suspension travel.

Before painting the frame, I will design and fabricate a sturdy trailer hitch for pulling the race car trailer. 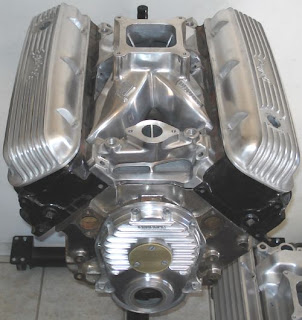 Here's the 454 block and large oval-port heads along with one of the Brodix single-plane intakes that I smoothed out and polished with abrasives.

It's tempting to add some serious muscle here, but this one has to be reliable and run on pump gas. 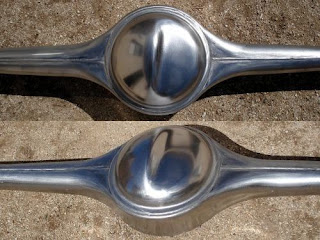 This is one of several '57-'64 Olds rear ends I've bought, cleaned, and polished with abrasives.

These Olds rear ends are strong, they look great, and they're "period correct" for the traditional hot rods and race cars I like.

The '57-'64 Olds rear ends are no longer easy to find, and when they do show up, they're usually open rear ends rather than the Oldsmobile "Anti-spin" or Pontiac "Safe-T-Track" limited-slip.

On eBay, a couple of days before I bought the truck, I had bought the rear axle housing and center section out of a one-owner 1961 Oldsmobile. This car had 2.87 gears in an "Anti-spin" limited-slip center section that takes 31-spline axles. 2.87 is a taller ratio than I would have chosen, but a variety of new gears are available for it.

Gravel pan (behind the front bumper)

I have found that this site is very informative, interesting and very well written. keep up the nice high quality writing Land Rover Parts Utah