Four-cylinder Fords made their final appearance in 1933, but V-8 models got all the attention, and none moreso than the 1933 Ford Cabriolet.

The rounded lines and smaller wheels set the Cabriolet apart from earlier Fords.

Ford's "flathead" V-8 engine had debuted in '32, shoving aside the popular four-cylinder Model A and reaching past Chevrolet's six-cylinder cars.

Now, stylists -- directed by Edsel Ford, Henry's only son -- tucked that V-8 into a more stylish machine, with a jauntily slanted grille and windshield. Sharp corners were rounded, and the hood mated with the windshield. Wheels shrunk to 17-inch size for a lower stance. Streamlining was in vogue, and Ford determinedly followed the trend. 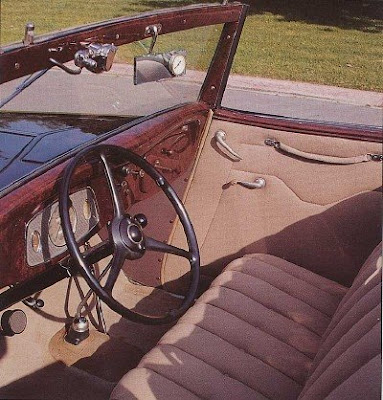 The dashboard and interior of the Ford Cabriolet were sparse yet functional.

Engineers redesigned the Ford's frame and injected an extra 10 horsepower into the V-8, for a total of 75. Hot rodders later grew to love that flathead engine, praised for its power by none other than bank-robber John Dillinger.

In its second season with V-8 power, Ford offered a long list of body styles and trim levels -- none more appealing than the Cabriolet, flaunting a rakish new profile.
Posted by Pw3680 at 3:39 PM