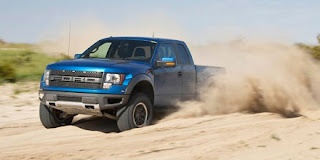 We're sideways at maybe 70 mph and I see the washout looming on the right. It's only two feet wide, but from where I'm sitting, it looks like the Grand Canyon rushing toward us-dark and deep, with jagged edges carved by recent heavy rain. This is going to get ugly.

Gene Martindale deftly flicks the truck back to the right at the last second, roostertails of sand spitting from the rear tires as he kicks the beast in the belly and unleashes 411 angry horses. I see what he's doing: The washout abruptly peters out on the left, and now he's trying to unload the suspension on the right hand side. Even so, this is going to be a big hit. I brace myself, and...there's a muted thud, a sharp but not uncomfortable vertical movement, then...that's it. The sparkling-blue Ford F-150 SVT Raptor barely breaks stride as SVT development engineer-and Baja racer-Martindale races for the far horizon.

Ford's F-150 Raptor is the Porsche 911 GT3 of pickup trucks. Like a 911 GT3, the Raptor is a racebred piece of machinery you can drive every day on the street. Okay, the GT3's reflexes were honed in the green hell of the legendary Nurburgring Nordschliefe road course in Germany. The Raptor, meanwhile, was developed on the stony desert tracks, powdery sand washes, and bone-jarring whoopdies of Baja California. Point the Raptor down a rough desert track, and this thing will go as fast as you dare, without turning into a dribbling mess, out of breath and out of brakes, after a dozen miles or so. And it'll make you feel like a born racer. 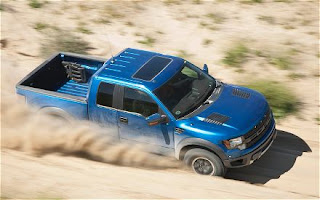 The Raptors are built using the biggest brakes and strongest half-shafts in the F-150parts bin, along with the heavy-duty rear axle. Engineers at SVT, Ford's in-house hot-shop, made hundreds of other detail mechanical changes, ranging from stiffening the engine and transmission mounts 45 percent to developing trick new forged-aluminum front wishbones.

Expensive Fox Racing Shox internal bypass dampers peeking out from behind the special 35-inch BFGoodrich tires are the Raptor's secret sauce, however (and they are expensive-SVT boss Hermann Salenbauch, an ebullient German whose résumé includes stints at BMW and Rover, says when he presented the Raptor program to Ford product development brass, one of them saw the piece cost for the dampers and exclaimed: "I could get half a V-8 for that!"). Boasting 11.4 inches of travel up front, and 12.2 at the rear, the Fox Racing Shox help the Raptor shrug off monstrous high-speed off-road impacts that would pop the springs through the fenders of a regular truck, yet deliver such sublime body control it rides like a Range Rover on the blacktop. It's that good.

But there's one thing the Raptor's been missing -- power. Though massaged to deliver 310 horsepower and 365 pound-feet of torque, even an SVT-tuned 5.4-liter Ford Triton V-8 is not the world's most scintillating powerplant. Throttle response is a touch languid, and by the time you reach the 5000-rpm power peak it's gasping as hard as Danny DeVito running a marathon. The Raptor needed more grunt. The good news is, it's got it.

Ford's new 6.2-liter V-8 is the engine the Raptor was always meant to have; the decision to launch with a tuned Triton was made when the engine and truck development programs got six months out of phase. Built at Ford's Romeo engine plant, the new 6.2 is a conventional iron-block, aluminum-head V-8 with single overhead camshafts, variable camshaft timing, and two valves-and two spark plugs-per cylinder. The crank is secured by four bolt main bearing caps, cross-bolted for extra durability. Forged-steel connecting rods are standard, as are lightweight magnesium cam covers and a composite intake manifold.

The base engine made its debut in the 2011 Ford Super Duty with 385 horsepower and 405 pound-feet of torque. A unique cam profile means the engine pumps out 411 horsepower at 5500 rpm and 434 pound-feet at 4500 rpm in Raptor trim. That's a useful 26-horse bump in power and a 29-pound-foot increase in torque, not to mention an extra 101 horsepower and 69 pound-feet over the old 5.4-liter engine. But the raw numbers don't tell the whole story.

The bigger engine adds 150 pounds over the Raptor's front axle, necessitating changes to front and rear spring rates and some of the damper valving to better manage what SVT engineers call "pitch inertia." That's important because one of the keys to the Raptor's unbelievable high-speed stability in the rough stuff is eliminating the tendency of the lightly loaded rear suspension to kick the truck's tail in the air over bumps. The other big change has been to the transmission calibration for the six-speed automatic, which will now hold a lower gear on the entry to corners if you're driving hard.

We drove 5.4 and 6.2 Raptors back to back along the same desert track, a challenging mixture of soft sand and scattered rocks and stomach-churning bumps, linked by a constant string of fast and slow-speed turns. The 6.2's crisper throttle response, how it punches harder out of the turns, and how it blows through deep sanddrifts that leave the 5.4 struggling, are all instantly noticeable. The revised transmission calibration delivers faster, more authoritative upshifts, yet holds a lower gear when you lift off the gas and pitch the truck sideways into a corner. The over-square configuration (bore is 4.02 inches and stroke 3.74 inches) means the 6.2 revs harder than the long-stroke Triton, spinning readily to 6200 rpm with a leaner, harder-edged snarl, thanks, in part, to the new engine's different firing order.

The extra power and torque make the Raptor more adjustable, more fun to drive in the rough stuff. You're more able to change the truck's attitude mid-turn; lift off the gas to get the nose to tuck into the apex, or punch it to kick the tail wide. It might weigh more than the 5.4, but the 6.2 Raptor feels lighter and nimbler. We tried it in 4x2 with the diff locked, and 4x4 with the rear diff open (you can run in four-wheel drive with the diff locked, but the front end then wants to push too much). In two-wheel drive, the Raptor is spectacular, sideways and spitting sand everywhere, but it requires pro-racer reflexes to keep the momentum up through the desert. Four-wheel drive is the hot ticket for most drivers in most conditions, the extra power and torque helping the front wheels pull you out of the turns, particularly in soft sand.

The 6.2 engine is a $3000 option. Worth the money? You betcha. In fact, it's such a no-brainer that, of the 7000 orders that have been placed for the Raptor at this time, 3000 or so were for the 6.2, even though no one outside of Ford engineers and execs, plus a handful of media, have actually driven it. Once the Raptor 6.2 starts to hit the streets, we wouldn't be surprised if demand for the 5.4 slowly dries up.

And what will SVT do for an encore then? Well, with a bump in the compression ratio, a revised cam profile, new headers, and remapped engine-management system, the new 6.2-liter V-8 is good for a reliable 500 horsepower and 500 pound-feet. The engine's already been race proven in the Baja 1000, installed in the Raptor R. The SVT engineers know better than most the truth in the old saying that racing improves the breed-more than a few are racers themselves. A Raptor R for the street? Now that would be one helluva truck. And the line starts right here.

The true stroke of genius in the Raptor is this time SVT hasn't tried to make a truck do what it really can't do: drive like a sports car. Sure, the slammed, fat-tired SVT F-150 Lightning was fun (as was the outrageous Dodge Ram SRT10), but it was a pretty one-dimensional vehicle. And no matter how good you were behind the wheel, you'd still get your doors blown off by a Porsche.

Turning a truck into a desert racer you can drive on the street makes a lot more sense. Desert racers are built tough and built to go off-road; there's a big slice of truck DNA right there. The Raptor might not have the payload and towing capability of a regular F-150, but it will still haul stuff. And it will take you off-road in-below racing speeds-real comfort. For that reason, the Raptor is apparently proving popular among Texas ranchers who regularly drive across rough tracks to the farthest corners of their property.

But if the Raptor is the Porsche 911 GT3 of pickup trucks, it's perhaps not too much of a stretch to suggest that, as Porsche does with the GT3, Ford might support a desert-racing class for near-stock Raptors. Mention the idea to the folks at SVT, and you'll get a knowing smile.