Historians aren't always considerate. Why else would we associate the remarkable '61 Lincoln Continental Convertible first and foremost with the assassination of President John F. Kennedy? Curse or blessing? You be the judge. 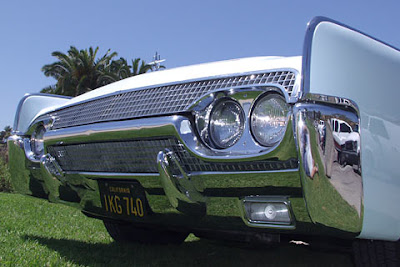 An amazing design exercise in the finest mid-century style, conceived by much-lauded maestro Elwood Engel, the 1961 Lincoln boldly stepped out of the shadow cast by its predecessors, the lumbering Mark III/IV/V Continentals, built between 1958 and 1960. It represented a big step toward a more refined, elegant automobile concept, easily eclipsing the garish old steel dinosaurs of the rock-and-roll decade. Bigger was not always better! 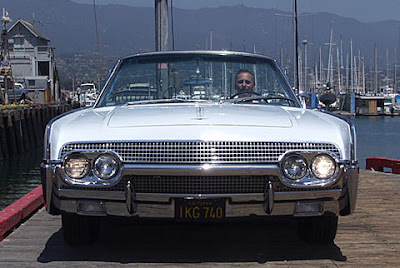 The 1961 Lincoln Continental Convertible's unique appeal lies in the fact that it was the first mass-produced, post-WWII American four-door automobile with a fully retractable roof. Equipped with rear suicide doors, it would also be the last, since no manufacturer has taken the challenge of creating anything like it since production of the Lincoln convertible stopped in 1967. Its significance being recognized by more and more enthusiasts, the '61 is destined to become one of the most desirable collector cars of the future. We predict that prices for hard-to-find, rust free, original examples will spiral upward with every passing year.

The particular car presented here, VIN *1Y86H418407*, one of just 2,857 Lincoln Continental 4-door convertibles built in 1961, has led a pampered life in sunny Santa Barbara. Unlike many of its siblings, its unibody structure never suffered from exposure to rain, snow, or road salt, its complex electro-hydraulic system never experienced neglect.

Still featuring its original-issue California black-and-yellow license plates, front and back, the car has never left the Golden State. Sold new at Channel City Motors Lincoln-Continental-Mercury, located on 317 State Street in downtown Santa Barbara, near the old Highway 101 intersection, it was owned and pampered for 42 years by a single Lady owner, who was forced to sell the car due to health reasons last year, shortly after her 90th birthday.

Odometer shows 65,134 original miles, that's an average of 1,500 miles driven annually since 1961. This Continental has always been a pure sunshine cruiser!
We'll now inspect this magnificent car inside and out, top to bottom, and you are cordially invited to join us.

Let's start with the body.

Never any rust is perhaps the most important statement I can make with confidence after having thoroughly scrutinized the Lincoln's body. Evidently, this car has never been apart and appears to carry most of its factory-applied sky blue paint. Certainly, after more than four decades and despite the exceptional care this car has always received, there are a few minuscule paint imperfections such as small scratches, a few worn spots atop the right front fender, and touched up rock chips.

Nothing to lose sleep over, though. Looking at the lustrous, hand-rubbed and polished enamel paint, I seriously doubt you'll be able to find a better original survivor, anywhere. 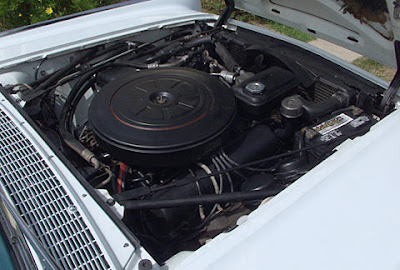 Lincoln is powered by the incredible 430 cu.in., 300 h.p. big block V-Eight, a gentle giant, runnning whisper quiet to this day. We just had the timing adjusted and the carburetor rebuilt; now, this baby truly flies down the freeway, never losing its stately composure!

Dual exhaust, mufflers, and brakes have also been replaced as necessary. Special-order high-performance radial whitewall tires of the dimension P225/75/R14 were fitted all around. Parts for the Lincoln are still easily available at local parts stores and from various specialists. The only--unexpectedly--big expense was the rebuild of the power steering pump, carrying a $600.00 price tag, including installation.

All told, we've invested about $4,500.00 in the car's re-commissioning after its prolonged garage hibernation. 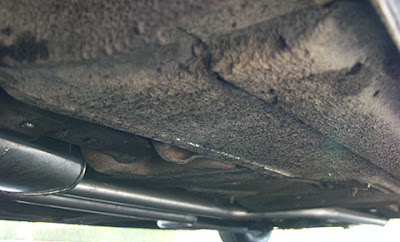 Alas, it was well worth it. After all, you might never see another early "Kennedy Continental" with a healthier undercarriage. The factory undercoating is still fully intact.

Watching this huge luxury 4-door transform from closed sedan into 6-seater roadster will amaze you (and all bystanders) time and again. There are no buttons to unbutton, no latches to unlatch.

Pull out the knob below the dash, and, just like magic, the deck lid opens, a flap rises, the convertible top gently lifts, then completely folds, disappearing in the trunk. Just pray for none of the 42 relays and switches to stick, when you need Houdini to perform . . . 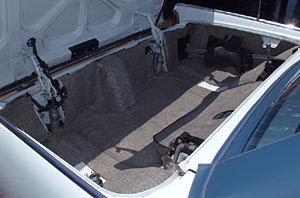 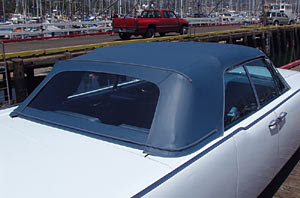 The most impressive convertible in the World! Local surf guru Johnny Wiggins cruises to Rincon almost daily in a similar Linc, his vintage Hobie sticking up from the rear seat. Hang ten . . . 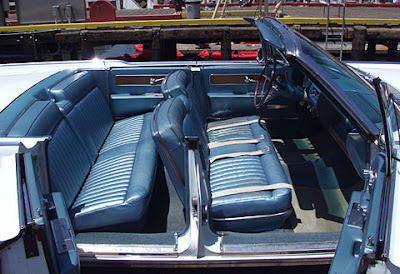 Check out the Lincoln's roomy interior!

Suicide doors make entering the rear quarters fun; they also work fabulously as a design cue. Everything about the '61 Lincoln seems to say "Here comes a special automobile in the grand pre-war tradition." 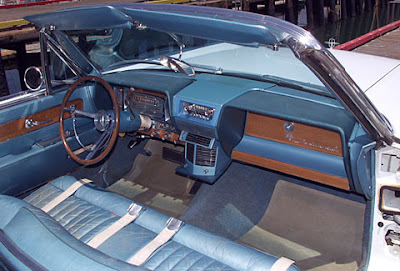 A pure mid-century delight, the opulent dash evokes interior design by Eames, Aarnia, and Panton. The '61 Continental dash has garnered universal praise for being impeccably executed. 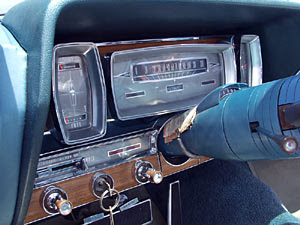 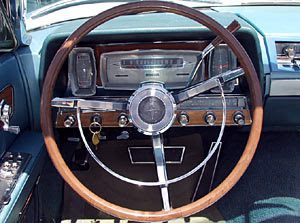 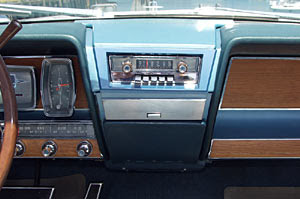 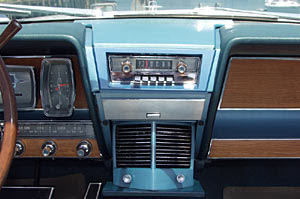 Air conditioning vents appear at the touch of a button, almost as exciting as the retractable top. Factory transistorized radio still works perfectly. 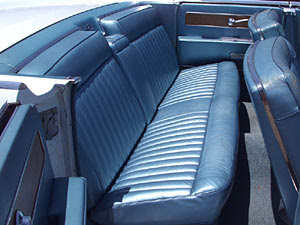 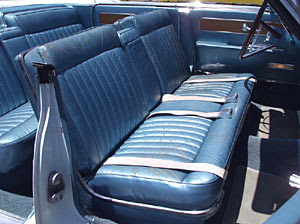 Metallic teal leather has miraculously survived intact for 43 years. Sure, there's some gentle wear to the driver's seat, but this being the heavy duty Detroit leather unobtainable today, it still exudes a richly patinated elegance any Bentley or Bristol owner would kill for. The rear seat looks like it has not been used at all. Note retractable center arm rests, front and back. 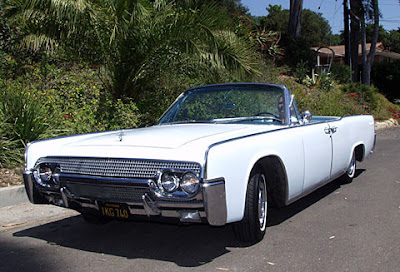 We utterly enjoyed the time spent behind the wheel of this gentle giant. The Lincoln is surprisingly nimble. There are no shimmies or rattles. Passing slower late models on the freeway comes easy; the convertible possesses plenty of panache. Around town, great visibility and power assisted steering and brakes ensure superior manoeuverability. 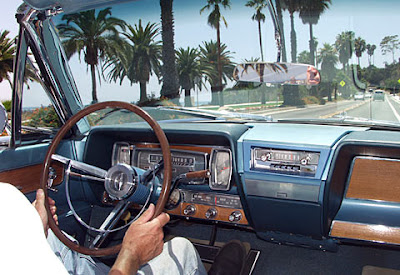 Let the sunshine in! Like a posh tanning salon on wheels, this '61 Lincoln provides the ultimate joy for true lovers of classic American automobiles. Regular folks can only stand by and stare, a few oldtimers even raise their hand to salute when you drive by. After all, Jackie Kennedy used her sky blue Lincoln convertible extensively during vacations in Hyannis Port, and LBJ had one on his Texas ranch, special skid plates and all. 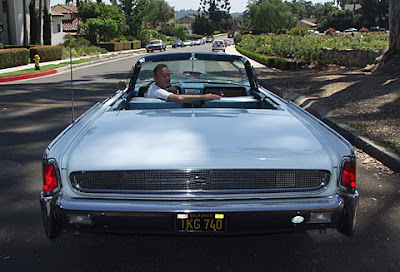 Here's a certified milestone automobile, a prime collectible, and one of the finest post-war Lincolns money can buy. Being a rare first-year specimen makes it even more desirable. Restoring one of these whispering giants can become an utterly expensive undertaking. Thus, buying the best original car you can find is--as always--valuable advice. Is there a nicer, all original convertible on the market, anywhere? 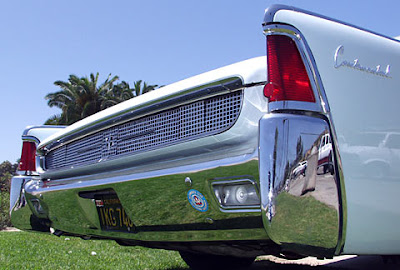 A one owner, low mileage California black plate car, this Lincoln has survived forty-three years undisturbed and unrestored like an antique hidden for decades in a climate-controlled bank vault. It's the proverbial time warp on wheels, needing nothing but a new, loving owner who cherishes it as much as its original owner did. As a pleasant side effect, this rare '61 will become more valuable as time marches on; we guarantee it!