Where were you in Sixty-Two?
Ford's 1962 Thunderbird Sports Roadster was--and still is--one of the most futuristic-looking automobiles in history. 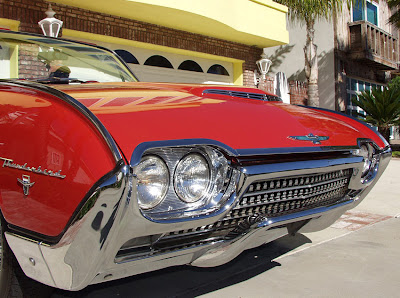 The third-generation 'Bird was manufactured between 1961 and 1963; it featured Ford's trademark big, circular taillights that looked like rockets, razor-sharp tailfins, and tastefully restrained chrome ornamentation. Less than 10,000 Thunderbird convertibles, including Sports Roadsters, were built in '62. All came with a bullet-proof 390 cu.in. V8, developing 300 horses in standard trim, and the smooth Cruise-O-Matic three-speed auto tranny. Priced around $5,000.00, a lot of money in 1962, the open-air T-Bird, with its coil-spring front suspension, was among the best-riding cars of the day. 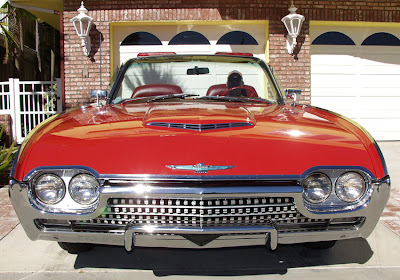 Looking for all the world like a factory-built custom car, the "Bullet Bird"--as it is known among enthusiasts--is of a timelessly beautiful design.

This stunning Rangoon Red (color code J) example, VIN *2Y85Z164525*, was sold new in California and lived here for many years, until its second owner, a retired aerospace engineer, moved to Portland, Oregon in the late 1980s. He was an active member in the Vintage Thunderbird Club International (the 1992 membership roster is included, listing the car as a "62 Roadster"), taking his pride and joy to many regional shows. After the owner's passing, the big bird returned to California. 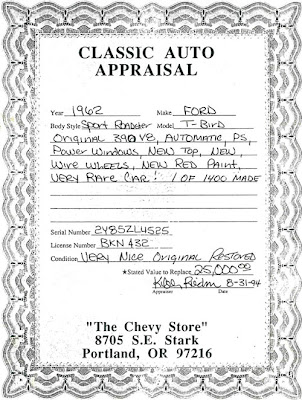 Twelve years ago, in 1994, this beautiful '62 was appraised at $25,000.00. The appraiser called it "very nice original restored." Since then, the car has hardly been driven. Collector car prices have seen steep increases across the board during the past few years; in 2006, the Thunderbird's appraisal would reflect a markedly higher value. 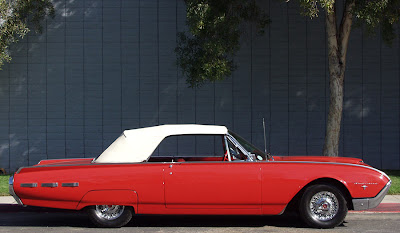 Cars from the Fifties and Sixties, especially the convertibles, were notoriously rust-prone. This T-Bird is a notable exception: it has always been enjoyed as a fair-weather toy and has not suffered any corrosion damage. There are no bubbles beneath the beautful DELTRON acrylic urethane paint. The bodywork has survived in fantastic condition, without any dents or scrapes; the paint looks very smooth and glossy. The white convertible top is in excellent condition; there are no rips or tears and the large plastic rear window is clear. 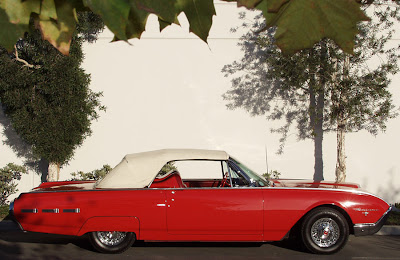 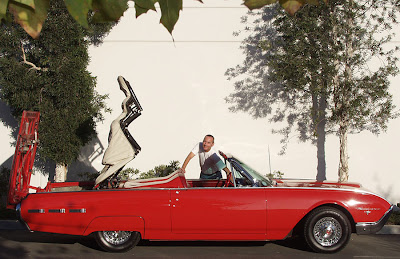 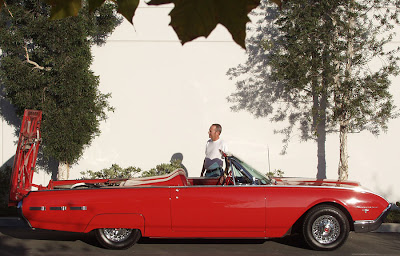 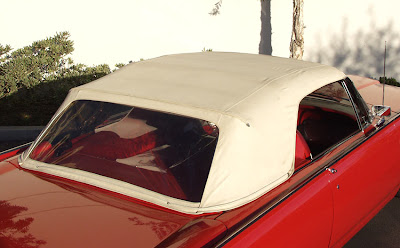 Speaking of the top: the '62 Thunderbird features a top mechanism that's essentially similar to the one found in the big, four-door Lincoln convertibles of the era. It's also every bit as complex, and before buying one of these fascinating cars, you should make sure it works without any hiccups! On this particular convertible, lowering the convertible top is as easy as it is mesmerizing. Pushing a single switch--located on the door panel--instantly sets the progress in motion. All relays and switches work flawlessly; the whole mechanism has just been fully serviced by a local specialist, to the tune of a cool $1,000.00. After all is said and done, the convertible top completely disappears beneath the trunk lid. Combined with the fiberglass tonneau cover, the '62 T-Bird featured the longest rear deck in the industry. 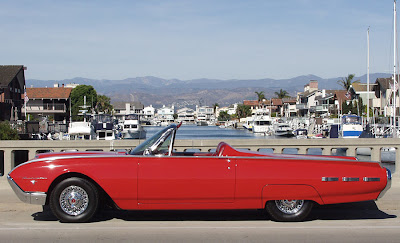 The '62/'63 T-Bird convertible might be the only production four-seater in history to become a two-seater. Bud Kaufman developed a fiberglass tonneau to cover the rear seats: when installed, this cover forms twin headrests. With Kelsey-Hayes chrome wire knock-off wheels completing the classy (and classic-looking) package, the famous Sports Roadster was born. 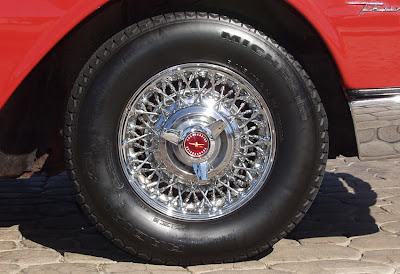 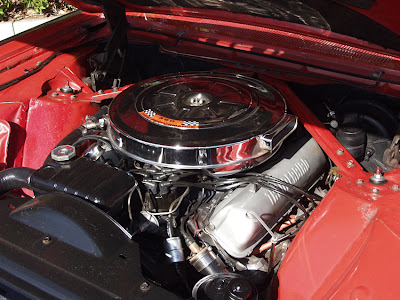 Toothbrush-clean engine bay houses Ford's fine 390 cu.in. big block power plant, ensuring smooth progress and fantastic reliability. The engine and transmission have just over 16,000 miles on a complete rebuild. There are no engine oil leaks.
Brakes, shocks, suspension parts, tires and wheels, heater core, hoses, and control valve, you name it: all the important items have been replaced. Always pampering his pride and joy, the owner was not afraid to spend some serious cash to keep the car in prime condition. 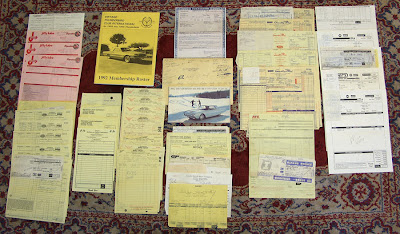 Forty-three records for maintenance and parts--chronologically filed in clear plastic sheet protectors--are included, totalling exactly $15,709,38 and cementing the car's status as one of the nicest Thunderbird convertibles in existence. 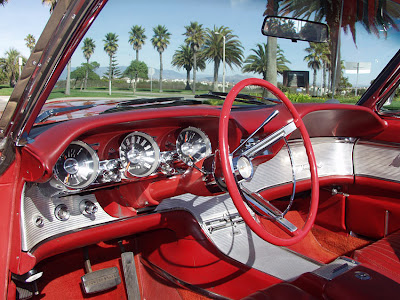 Reminiscent of a spaceship's cockpit, the T-Bird's dash wraps around driver and passenger; a curved console, clad with anodized aluminum smoothly merges with the dashboard. 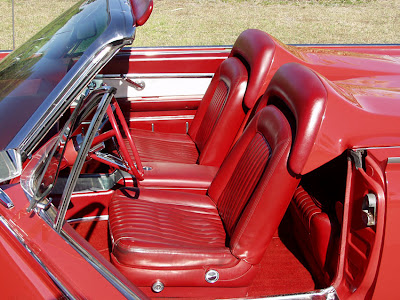 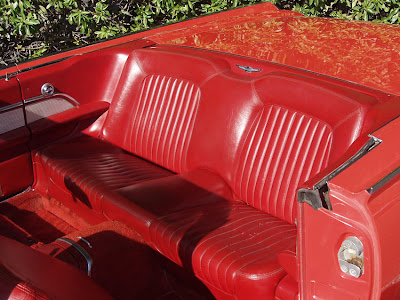 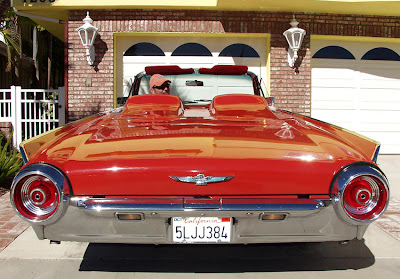 Ready for a test drive?
Sure you are, but before we take off, there are two more areas to inspect: the undercarriage and the trunk. 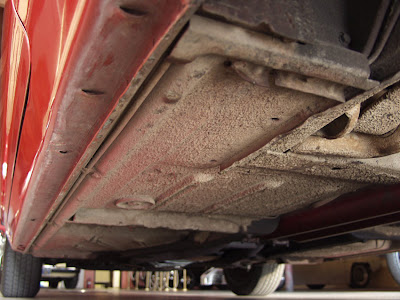 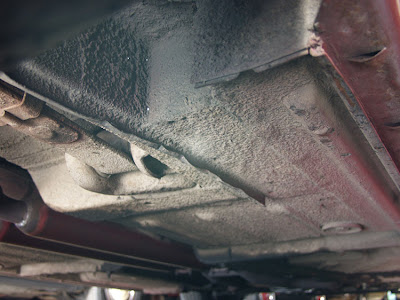 Only a pampered California car can boast an undercarriage that looks as perfect as this one.

Virginal down to the factory undercoating, there's not a spot of corrosion to be found anywhere. If you keep in mind that this 'Bird already celebrated its 44th birthday, you'll have to agree with our assessment: this undercarriage is truly as good as it gets! 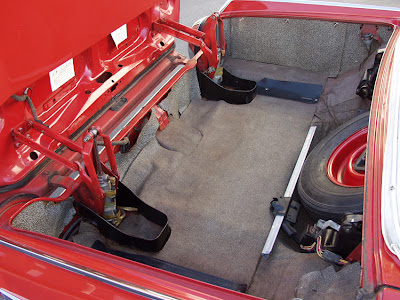 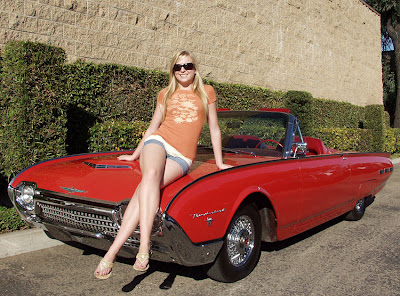 Back in the day, the Thunderbird Sports Roadster was a sensation. Its spaceship theme beautifully executed throughout, it looked like it had just escaped from a science fiction magazine.

Today, our senses are bedazzled by automobile creations attempting to crossover in as many directions as possible. We can neither feel passion nor motivation to own one of those. Give us a "Bullet Bird" any day! 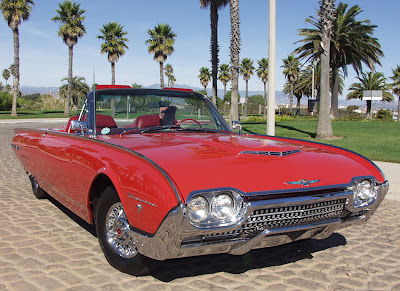 What an uplifting experience it is to enter the realm of such a jet-like escapee from the Swingin' Sixties! With a steering column that slides 10 inches to the right to ease your entry, the car fits like your favorite baseball glove. Turn the key, and the big Vee-Eight instantly comes to life, rumbling happily with a smooth-as-silk idle. Power steering, power brakes, power windows, power seat and--of course--the power top are delightful, all-American conveniences. 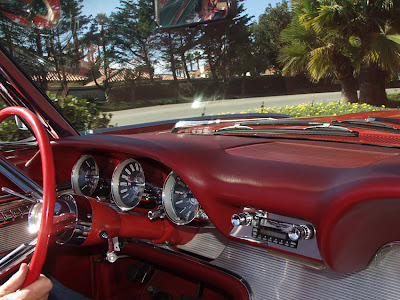 Push the gas pedal down a little: it's like you're riding on a cloud. Push a bit harder, and the big block's torque will become apparent as the Thunderbird gets down on its haunches while surging forward with utter determination.
Note the updated "Thunderbird" AM/FM/Cassette stereo. 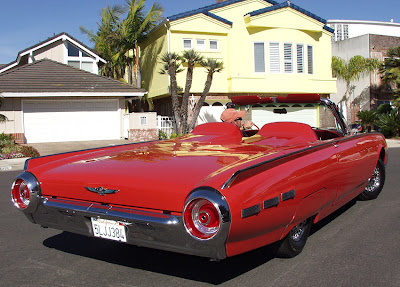 This car drives magnificently. It doesn't overheat, doesn't sputter. It feels so solid, you could take it on a cross-country trip at a moment's notice.
To buy and restore an authentic '62 Sports Roadster could easily cost $100,000.00. Here's the next best thing. This car is "fully sorted," everything works great, even the complex top mechanism. 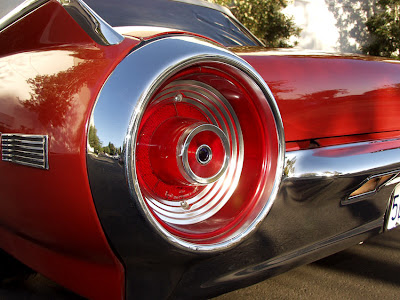 Provenance is of paramount importance in the classic car hobby, and this car delivers in spades. It's now ready to find a new home in the driveway of an appreciative caretaker. We think the 1961-3 open air Thunderbirds are among the most stylish, useable classics on the market today. Right in time for the season, here's this super fine, Rangoon Red example. Could it be Santa's favorite ride?

Addendum:
This fabulous Thunderbird sold in January 2007 to a museum in Hungary.
Posted by Pw3680 at 2:47 PM