Daniel Edward Newton and I have been friends for 45 years. We met in kindergarten in the fall of 1962. We later went to the same college, roomed together, attended who knows how many sports-car races, and have never had a cross word between us. Well, there was the time when his dog ate a box full of rare rubber parts for my Pantera...but Dan gave me some money and bought pizza that night, too, so we forgot about it.

A few months before Dan and I began terrorizing the playground at Valley Vista Elementary School (Cucamonga, California), his folks, Ed and Connie Newton, bought a new 1962 Ford F-100. It's a longbed half-ton with a 292-cubic-inch Y-block V-8 and manual everything. What was labeled a Custom Cab wasn't all that custom back then. His father converted the original three-on-the-tree to a granny-low four-speed so the 160-horse V-8 could better handle trailer towing. Dan and I took it camping and on many road trips with our 10-speeds or motorcycles in the back. Went to the late, great Riverside International Raceway, to the swap meet, to the dump, and who knows where else. I've known the Newtons' F-100 its entire life, which equals about 90 percent of mine.

Dan's parents have since passed away, leaving him the truck. He drove it every day, then only once in a while, before parking it a few years back. He and his wife have other vehicles, he has a long commute, and the Effie has no A/C (or other power accessory of any kind). So the truck was mothballed in a desert storage lot to bask in quiet, sun-drenched retirement. 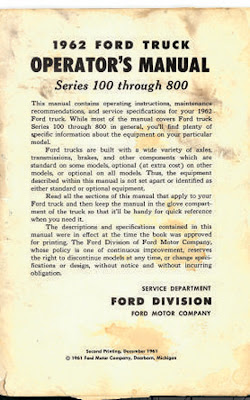 Dan and I were e-mailing recently, and I asked what he was doing with the F-100. He replied, "Oh, I'm kinda done with it. It's part of the family, but I'm paying to store it, I don't drive it, and it deserves someone who wants it. I'm going to bring it to our next block-party garage sale, and if someone will give me a couple hundred bucks, they'll own it."

In a moment of inspired weakness, I replied, "Oh, hell, for that, I'll take it." Dan, who possesses Leno-level comedic timing, waited the requisite three beats, and pinged me back with "Bless you, my friend. It's yours."

Now I'd have to get my "new" truck home. I'm sure we could've gotten it running and out of storage under its own power, but I didn't want to drive it back from scenic Victorville only to blow a hose or clog the fuel filter. Instead, I borrowed this $95,000 Cummins turbodiesel-powered Dodge Ram 5500 with a fully articulated Jerr-Dan flatbed rig--what more appropriate way to get my $300 F-100 home?

This almost-a-Kenworth proved amazing. We've all grunted and pushed old cars onto trailers, and that's no fun. I didn't have to deal with that this time--I practiced with the Jerr-Dan's hydraulic joysticks until I could make its polished aluminum bed dance. After rocking the platform down to the ground, we threw a chain around the Ford's front axle and winched it aboard with no drama. It was fun to play with the flashing amber light bar, too--it made me feel like a real AAA tow guy. The hearty Dodge drove as if the F-100 was no more than a butterfly on its shoulder.

I'm now the Ford's second owner, ever. What am I going to do with it? I have no idea. But after so many memories in this thing, I just wanted my own crack at it. As I write this, the Effie is at my mechanic's shop receiving a new fuel tank, fresh brake cylinders, and a fluids/belts/hoses treatment. From there, I've got some cleanup work to do, and tons of it. That's okay; I'm a college-educated scrubber.

See those crummy spoke mags? Those came off my old 1954 F-100 about 15 years ago. I had no idea they would come back to haunt me. They'll have to go, in exchange for a set of vintage steelies and caps. I'll put some period mirrors on it, the seat needs to be recovered, and burbling dual exhausts are a must. Some spray-can detailing for sure. Other than that, the goal will be to see how little I can spend on it. New paint? And cover up that original patina forever? No way!

Do they have a 12-step program for Old Car Fools? Until someone can answer that, you'll find me in the Ford Truck Parts isle at the Pomona Swap Meet. Wish me luck.