Rear fender fins became history in the early 60's. For the 1960 model year Ford introduced the compact Falcon to keep the full sized car and the Thunderbird company in the dealers showroom. The mid-sized Fairlane would arrive in 1962 and the sporty Mustang in 1964. 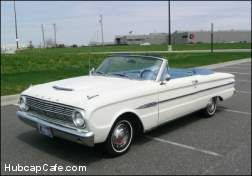 Fords got a radically restyled new body for 1960. This, top of the line Country Squire station wagon shows the new design off well.

The compact Ford Falcon was only mildly restyled for 1961, most obvious was a new grille, as seen on this 2 door sedan.

The 1961 Ford Falcon two door station wagon one of two wagons available, the other being a four door version.

1962 saw new front fenders with a slight point and a new grille for the Ford Falcon. The Futura is the sporty model with bucket seats and a console.

The 1962 Galaxie 500 Sunliner was one of two full sized Ford convertibles offered. the was the 500XL witch had bucket seats and console.

The 1963 the Ford Falcon was available as a hardtop, shown here, or as a convertible.

The mid-year introduction of the Galaxie 500 XL fastback hardtop brought a sportier look to the Ford line up. As an XL it had bucket seats and a console.

In 1963 the Galaxie was the second level in the line of full size Fords.

This 1963 Ford Farlane 500 two door sedan doesn't have a V8 badge on the front fenders, so the engine is probably a six.

Like all 1964 Ford Fairlanes the 500 Hardtop Coupe was slightly restyled with somewhat softer lines and no more fins.

The standard 1964 Ford Galaxie 500 Hardtop Coupe, like this one, was equiped with bench seats and a column mounted shift lever.

The 1964 Ford Falcon Sprint came with a V8 engine as standard equipment along with bucket seats.

Like all 1964 Fords the Falcon Futura 2 door hardtop was restyled.

The 1965 Galaxie 500 sedan had bright metal trim around the door window frames. This one also has a set of accessory rear fender skirts.

The 1965 full sized Fords were completely restyled with much boxier lines. This Galaxie 500 XL convertible is an example.

Ok, this may not always have been the 1965 Ford Custom sedan we wanted to see in our rear view mirrors.

The 1965 Ford Fairlane was estensively restyled getting new below the beltline sheetmetal all around.

The 1965 Ford Falcon carried over the restyling of 1964 with only modest changes, as can be seen on this convertible.

The 1966 Ford F100 carried on with the same basic styling from 1965. A Ford "Twin I Beam" emblem appears on the sides of the front fenders. 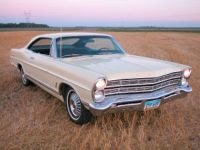 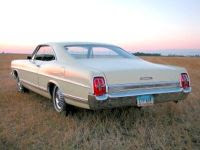 This 1967 Ford Galaxie 500 two door hardtop is equipped with a three speed automatic and a 390 cubic inch engine.The Galaxie 500 was the top selling full sized Ford in 1967.

The 1967 Ford Fairlane 500 convertible was available with either a six cylinder engine or a V8.

The retsyled for 1967 Country Sedan continued to be Fords top selling station wagon.

In 1968 the full-size Fords got a restyled front end. This top of the line Galaxie 500 XL convertible has hidden headlights, and front bucket seats seperated by a console.

The 1969 Ford Fairlane Cobra was a fairly basic Fairlane two door hardtop with bench seats and a huge motor.

The 1969 Ford F series trucks looked pretty much like the 68s. This two tone F250 has custom wheels.