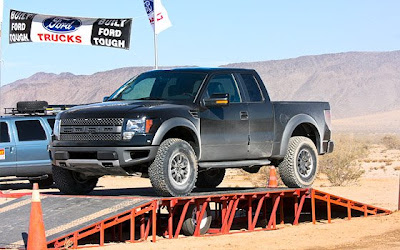 The right to own the first production 2010 Ford F-150 SVT Raptor high-performance offroad pickup fetched $130,000 (plus a 10 percent buyer's premium) at the 2009 Barrett-Jackson auction in Scottsdale, Ariz.

Not auctioned was the brand-new 6.2-liter premium V-8 version, estimated at 400 hp and more than 400 pounds-feet of torque. The 6.2-liter Raptor is expected to go on sale in the fourth quarter of 2009.

All proceeds above the Raptor's retail price (still to be announced) will be donated by Ford to the Juvenile Diabetes Research Foundation.