Find of a Lifetime:

Like modern-day fables, once in a blue moon we read about a car enthusiast who stumbles upon an untouched original Jaguar Lightweight E-Type, an entombed '54 Corvette, or--like Jay Leno--the missing Duesenberg, peacefully hibernating for decades in a Manhattan parking garage. It does not happen very often, but when it does, it's an event of a lifetime, just like winning the lottery.
That's how we felt upon discovering the magical FoMoCo Freighter, the much-admired cover car of Rod & Custom Magazine's August 1962 issue. 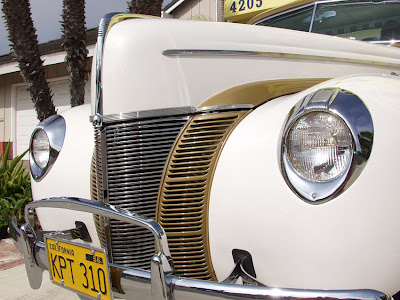 Due to a very lucky constellation of circumstances, this Full Kustom survived 44 years as if preserved inside a vacuum bubble, unharmed, unaltered, unbelievably beautiful. For various reasons, immaculately preserved, unrestored custom cars from the early days of the hobby are virtually extinct; the emergence of the FoMoCo Freighter after nearly five decades of gentle storage is a singularly important event. Not even Bruce Meyer, custodian of one of the most distinguished Hot Rod collections on the planet, can boast of owning a truly original, untouched early car. 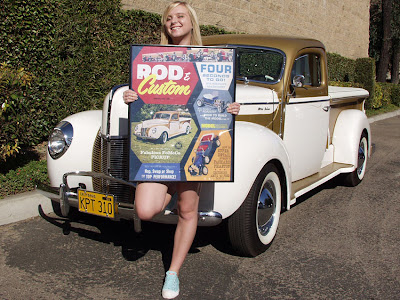 Never been exposed to a drop of rain in its life, and having traveled a mere 6,219 miles in almost half a Century, this super-low-mileage California survivor is in such amazing time warp condition, it's instantly ready for another glossy photo spread in Rod & Custom or The Rodder's Journal! 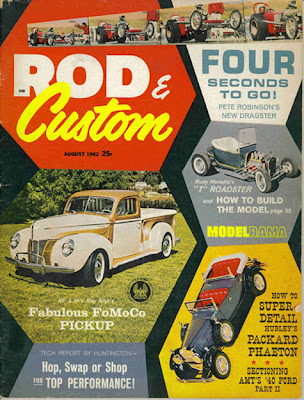 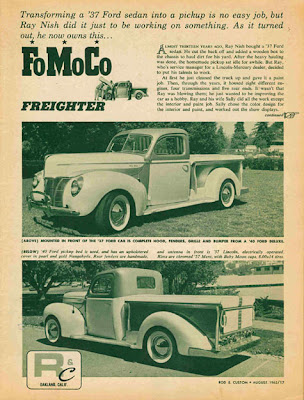 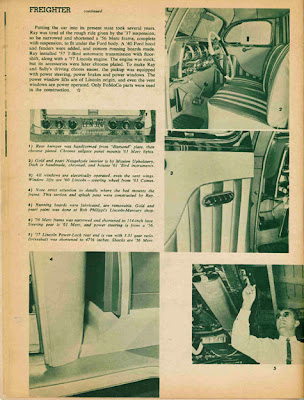 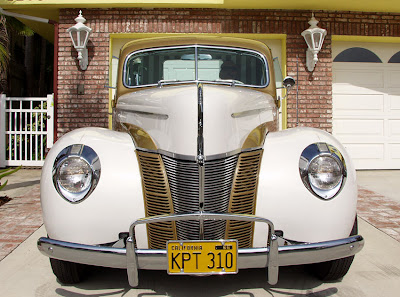 During the early 1960s, Ray Nish and his wife Sally occasionally drove the FoMoCo Freighter to Central California shows, accumulating less than 5,000 miles on the odometer. Always properly cared for, the Freighter eventually spent a number of years as part of the private Robert J. Pond collection in Palm Springs, California.
Miraculously, the Freighter's caretakers resisted the urge to "update" or "modify" anything, presenting you with the unheard-of opportunity to obtain a virginal specimen hailing from the Golden Age of Kustomizing! 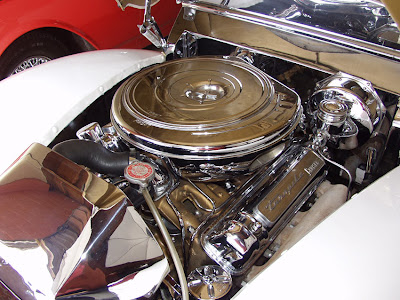 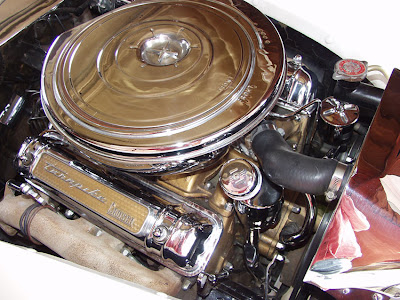 State-of-the-art, circa 1962. The FoMoCo Freighter rests on a narrowed and shortened '56 Mercury frame and suspension. It is powered by a monstrous, fully chromed and aseptically clean '57 Lincoln 368 cubic inch Turnpike Cruiser V-8 engine, backed by a '57 Ford Thunderbird C-6 Cruise-O-Matic transmission and a '57 Lincoln Powr-Lok rear end with 3.31 gears. Firewall and radiator cover were hand-formed from sheet steel, then triple chrome plated. 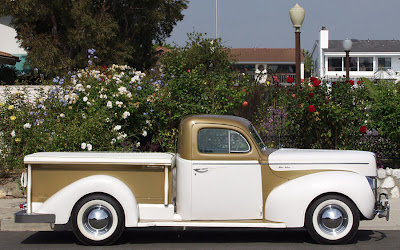 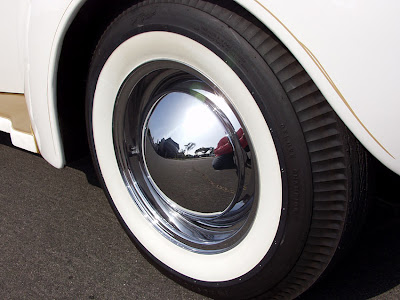 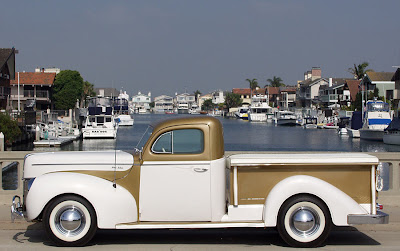 Words and pictures can't begin to describe the quality of workmanship found on this custom. Literally, thousands of hours went into creating this masterpiece. The original sedan body was completely re-worked, including a 2-inch top chop. '40 Ford Deluxe hood and fenders were fitted, an entirely custom-made bed and rear fenders added. Even the--removable--running boards are hand-made from heavy gauge steel.
All the subtle body mods have withstood the test of time admirably. There are no bubbles; there's no rust anywhere. The two-tone Pearl and Byzantine Gold paint--done at Bob Philippi's Lincoln-Mercury shop--still looks fabulous, with just a few negligible signs of age. Plentiful chrome trim is shiny and pit-free. We've had well-known striper "Itchy" freshen the original Tommy the Greek pinstriping. 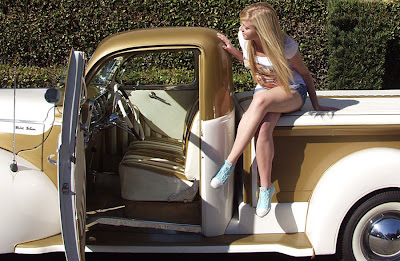 Let's check out the extraordinary interior! 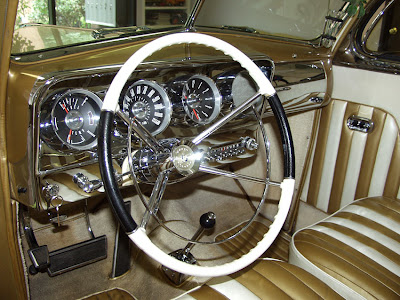 Having unlimited access to late-model parts, Ray Nish installed brand new 1961 Thunderbird gauges, radio, and switches in the Ford's much-modified, chromed dash. Immaculate steering wheel is from a '61 Comet. Everything works, even the AM radio.
Note '57 T-Bird floor shifter and neat pedal layout. Yes, the emergency brake is functional, too! 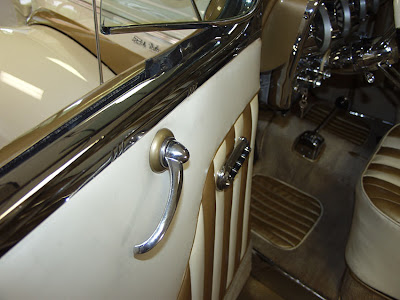 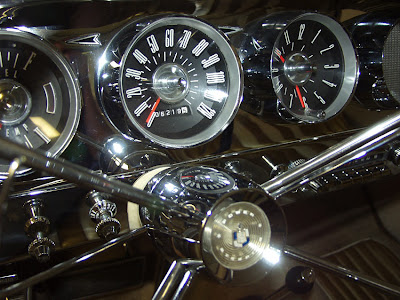 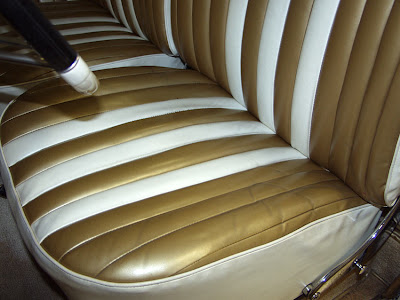 Details, from left to right: 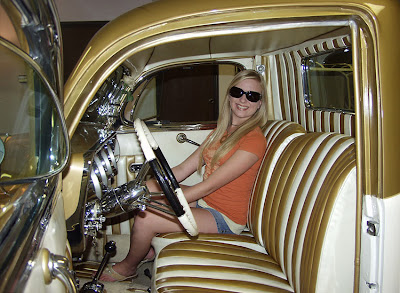 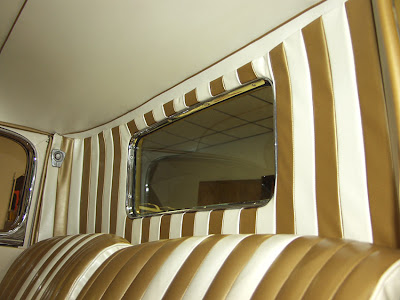 Just like body and engine bay, the interior, fashioned in 1961 at Oakland's Mission Upholstery shop, is completely intact and original, including carpet and headliner. Note the fully finished, chromed window frames. Tinted safety glass was used all around. 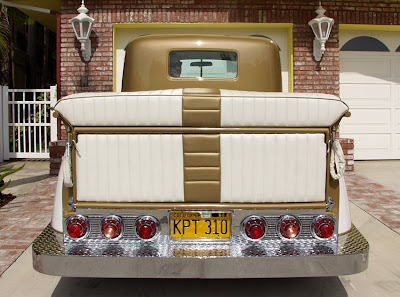 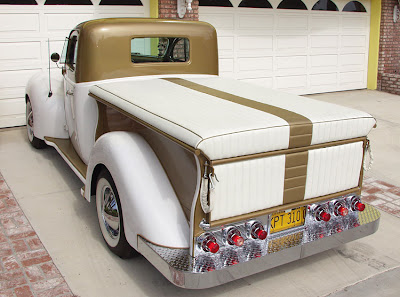 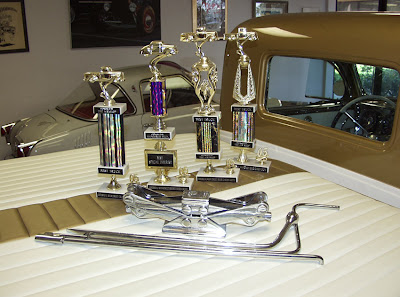 Truck was shown locally in 2005, returned with a trophy every time! To call the FoMoCo Freighter a crowd pleaser would be quite an understatement.
Trophies are included with the pickup. 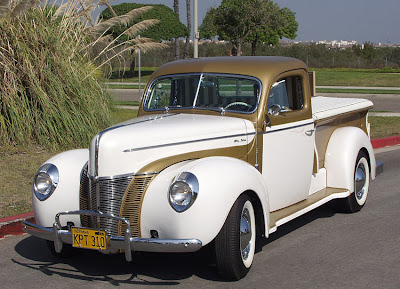 Ready for a test drive? 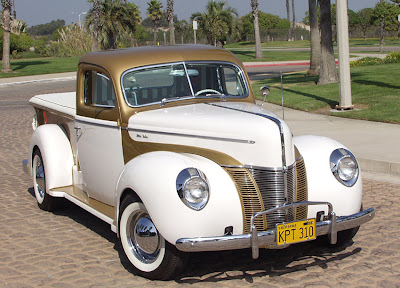 November 1st, when we took all of these pictures, was another perfect day in Southern California, warm and sunny, ideal for taking the FoMoCo Freighter on a cruise. Sure enough, this fabulous Custom truck does not disappoint. It starts, runs, idles, shifts, steers, handles, and stops as good as it looks. We've had the radiator and fuel system serviced for peace of mind; the Freighter never missed a beat. 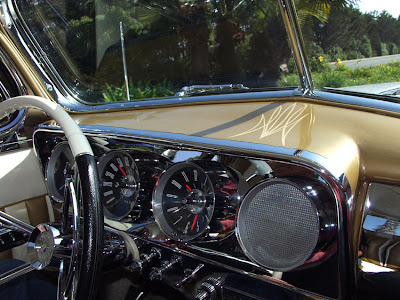 It's a very light vehicle and the big block Lincoln mill provides superior power, enabling us to cruise along effortlessly on the 101 Freeway, surrounded by admiring motorists of all ages. The Mercury suspension provides a smooth ride; the truck always runs cool: the FoMoCo Freighter is a fully functional museum piece! 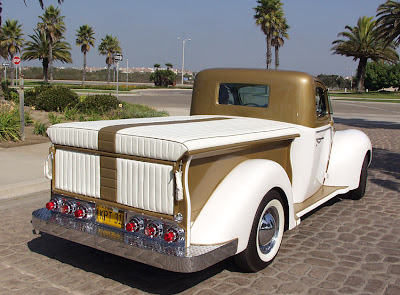 The all-steel FoMoCo Freighter certainly is one of the most important period custom cars in existence.

At the 2006 Barrett-Jackson auction, Don Tognotti's sympathetically restored Ford "Avenger," another early Sixties Oakland Roadster Show Star, sold for $216,000.00. You may be able to build another Kustom of this caliber for that kind of money, however, you will never be able to duplicate the pedigree of vehicles like the Avenger or the FoMoCo Freighter. These unique, historically significant automobiles are finally receiving the recognition they deserve, being proudly displayed in their own class at the Pebble Beach Concours d'Elegance.

In today's realm of ultra-collectible classics, authenticity and provenance are everything, and the Freighter features plenty of both. 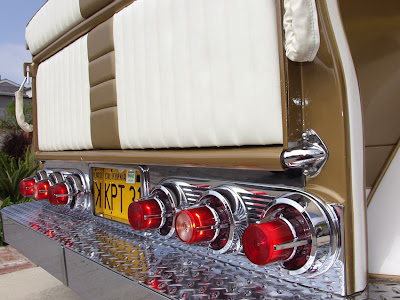 Rarely, if ever, will the opportunity arise to acquire a genuine, unaltered, pristinely original, early Custom, shown at the Oakland Roadster Show, featured on the cover of Rod & Custom, then properly stored for almost five decades. The fabulous FoMoCo Freighter has an illustrious past and is now ready for a celebrated future in the hands of a caring collector.

We are willing to bet the farm on it: within the next decade, this fantastic truck will be worth a quarter million Dollars!