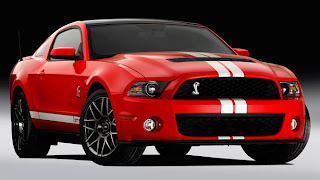 Ever since Ford introduced the modern Shelby GT500 four years ago, almost no one has complained about the prodigious power levels produced by its supercharged 5.4-liter V8. With as much as 540 horsepower and 510 pound-feet of torque in the 2010 model, there was no shortage of grunt. No, the issue was an excess of mass.

Before the contemporary GT500 was born, Ford had a blown aluminum block 5.4-liter V8 in the short lived GT supercar. However, when the engineers at Ford's Special Vehicle Team developed the GT500, they opted to mount the GT's cylinder heads on the cast iron block used in the big F-Series pickup trucks. After debuting a visual refresh for the Mustang a year ago, Ford has spent the last two months announcing fresh new powertrains for the base and GT models. That process has now come full circle with SVT rolling out a heart transplant for the Shelby GT500. The 2011 model finally has the aluminum powerplant we all wanted when it debuted, and the effect is absolutely en-lightening.

The SVT engineers actually had a reason for going with the iron block in the first place. Mustangs like the GT500 and its Cobra ancestors often end up being heavily modified for use at drag strips and race tracks, and the SVT crew wanted to make sure the standard block could stand up to the rigors of those significantly higher outputs. They chose not to use an aluminum block until they had a chance to develop one with the same strength as the iron version, and that time has now come.

We recently had a chance to sit down with GT500 chief nameplate engineer Jamal Hameedi in his office at SVT's headquarters to learn more about what's new for 2011. Switching to an aluminum block was a bit more complicated than simply digging out the casting molds that were used for the GT. The engine in that 200+ mph supercar used a dry sump lubrication system and featured iron cylinder liners. The new GT500 engine is derived from the structural design of the older block but retains the wet sump system used in other Mustangs. The real magic is something that most owners will likely never actually see. 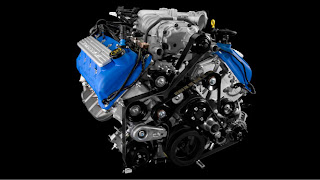 Last June we learned about an award that several Ford researchers had received for a cylinder bore coating system they developed called the Plasma Transferred Wire Arc (PTWA) process. The Ford press release at the time framed the award in terms of fuel efficiency and gave no real hint about what was about to come. It now turns out that the first production Ford to use the PTWA process will be the 2011 GT500.

The heart of the PTWA process involves feeding a steel wire into a device that heats it up to 35,000 degrees Fahrenheit and then sprays it onto the aluminum cylinder bores. Ford is not actually the first company to use a process like this. Similar mechanisms have been used to coat the fan blades in jet engines for a number of years. One of the primary differences is that Ford is using PTWA with a conventional steel alloy rather than some super exotic aerospace material. Ford isn't even the first automaker to use this specific coating process. That honor falls to Nissan, which actually licensed the technology from Ford for use on its V6 engine in the GT-R.

Hameedi believes that Ford has an important advantage over Nissan. Anyone that has ever used a teflon-coated pan is familiar with the problem of the non-stick coating peeling off over time. In the past BMW has also had issues with the nickasil coatings prematurely separating on some of its aluminum blocks. Getting any dissimilar materials to adhere to each other is always a problem, so the initial surface has to be specially prepared in order for the coating to have something to hang on to. Nissan licensed Ford's coating technology but used its own surface preparation process. According to Hameedi, Ford's surface preparation works so well that even after engines have gone through a full durability cycle the bores still look like new.

Using the PTWA process allows the block to have a thinner surface coating – only 150 microns deep – that is just as tough as one with cast or pressed-in iron or steel liners. However, using less material results in lower weight. According to Hameedi, the GT500 block is 8.5 pounds lighter than the sleeved GT version. Overall, the complete engine is 102 pounds lighter than the 2010 cast iron engine. The steel coating has also helped Ford reduce the internal friction of the engine, aiding both efficiency and power production.

Hameedi explained that some drag racers complained of power drop off on humid summer days, which was attributed to reduced heat transfer efficiency. SVT addressed this with a larger intercooler that helps the engine deliver more consistent power over its entire operating range as well as under different environmental conditions. Hameedi tells Autoblog that the new aluminum block engine should be able to survive "at least" as much maximum power in modified form as the iron block equivalent. Also aiding breathing is a larger exhaust system with 2.75 inch header pipes like those on the new 5.0-liter in the Mustang GT. Out of the box, the new powerplant delivers 10 more horsepower bringing the tally up to 550 hp with the same peak torque of 510 pound-feet. Eighty percent of that torque is available everywhere between 1,750 rpm and 6,250 rpm.

For 2011, Hameedi tells us "We're at the top of the power heap, we're the fastest accelerating vehicle, so this really wasn't about going any faster in a straight line. This was about improving the weight distribution and handling of the vehicle." The new engine contributed to a 120 pound overall weight reduction with most of that coming off the front axle. Most of the rest of the weight loss came from new lighter weight wheels that are part of the SVT Performance Package. The front wheels that come with the Performance Package remain 19 inches in diameter but are 4.7 pounds lighter. The rears grow to 20 inches but are still 2.8 pounds lighter. Cutting unsprung mass is never a bad thing when it comes to both ride quality and handling. Along with the extra rear grip provided by the larger Performance Package wheels and tires, SVT has added a 3.73:1 rear axle ratio. 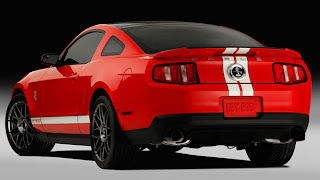 Like other 2011 Mustangs, the GT500 gets a new electric power assist steering (EPAS) system that Hameedi describes as "extremely precise." At parking lot speeds, he describes the steering effort as Lincoln-like but it rapidly builds up as you drive more aggressively and it supposedly has excellent on-center feel, something that is often tough to achieve with EPAS. We'll have to wait a few more months to find out just how precise that is since we won't get to drive the car until Spring.

Getting any high-powered car to accelerate, stop or turn is highly dependent on the adhesion between the tire and the road surface, especially when it's wet. SVT has adopted the latest generation Goodyear F1 supercar tires for the 2011 GT500, which Hameedi says are "a major step" beyond the previous version in both wet and dry grip. With the reduced mass on the front axle, SVT has also modified the spring and damper rates on both base and Performance Package models. The latter version gets 20.5-percent stiffer front springs and 9.5-percent tighter rears that also bring the front end 11 millimeters closer to the road and the rear 8 mm lower.

One of the main criticisms of the Mustang convertible ever since the S197 debuted for 2005 (actually ever since pretty much forever) is a lack of structural integrity. Because of that flexibility, the 2010 model GT500 convertible was actually considered more of a cruiser model and was thus tuned more for ride comfort than handling. Thus the old convertible was only available with 18-inch wheels. For 2011, SVT took the lead on developing an upgraded body structure for the convertibles that should help keep the corners of the car from moving relative to each other. The effort was successful enough that the changes are being implemented across the board on all 2011 Mustang convertibles. The 2011 GT500 convertible also gets bumped up to the 19-inch wheels and offers handling that is supposedly much closer to the coupe without degrading the ride comfort.

For those who want the sun to shine but still want the extra stiffness of the coupe, the GT500 is now available with the glass roof that has been available on regular Mustangs for the past two years. 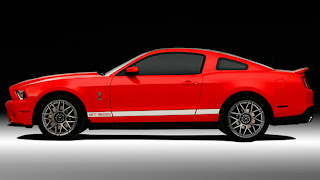 Regardless of the roof type, Hameedi tells us that the GT500 has "a very different driving experience driving an '11 from a '10, they're much more nimble, they feel more alive, the steering is quicker." The straight-line acceleration was improved by about 1/10th of second, but overall drivability and handling are said to be vastly improved. The upgrades are far more apparent on a road course than they are at the drag strip. According to SVT spokesman Patrick Hespen, the 2011 GT500 model is three seconds a lap faster than the 2010 around a certain un-named 2.3-mile-long, northern California racetrack that happens to play host to a big historic racing event every August. Closer to home at Grattan raceway in west Michigan, the 2011 GT500 is also about 2.5-3 seconds a lap faster. Given the relatively modest power increase, those are some big numbers.

While most GT500 drivers are unlikely to be too concerned about fuel efficiency, it is a political and commercial reality that Ford does have to deal with. The EPA rated the 2010 GT500 at 14 mpg city and 22 mpg highway and slapped a $1,000 gas guzzler tax on the hood. The addition of EPAS, reduced mass and reduced friction all helped to improve the 2011 GT500's EPA numbers to 15 and 23 mpg and cleared the GT500of the dreaded guzzler label.

Finally, just like the new 2011 V6 and GT Mustangs, the GT500 will go into production this Spring with an on-sale date before Summer. We'll be anxiously awaiting our first time behind the wheel of the 2011 Ford Shelby GT500.