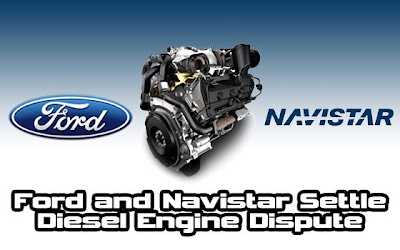 Ford and Navistar have settled a lengthy legal dispute over diesel engines.

The dispute started in January 2007 when Ford filed a lawsuit against Navistar, arguing that Navistar unjustifiably raised engine prices and had not been paying its share of repair costs for Power Stroke diesel warranty claims.

Ford said it had spent $1 billion on repairs and recalls to fix problems with legacy 6.0-liter Power Stroke diesel engines. Ford further contended that its purchase contract with Navistar allowed it to debit Navistar's invoices to recover those costs, which it had done up to $160 million after filing suit. In response, Navistar temporarily stopped shipping Ford its new 6.4-liter Power Stroke diesel engines and filed a countersuit seeking several hundred millions of dollars because Ford intended to introduce a new diesel engine that was designed by International Truck and Engine Corporation before its joint-manufacturing agreement with Navistar expired in 2011.

In a press release issued on Navistar's website, Navistar states the two companies will end their current diesel engine supply agreement effective Dec. 31, 2009. Ford will pay an unspecified amount to Navistar, but both companies will continue to collaborate on a range of other initiatives going forward.

Navistar will increase its equity stake in the truck- and parts-marking company Blue Diamond, which produces Ford-branded F-650 and F-750 medium-duty commercial trucks in Mexico. Navistar will also receive a majority stake in Blue Diamond's replacement-parts business. Both companies will continue their diesel engine supply relationship in South America.
Posted by Pw3680 at 5:32 PM