Ford offered two convertibles for 1957: the usual cloth-roof Sunliner and the first "hardtop convertible" that really did convert -- the 1957 Ford Fairlane 500 Skyliner. What's more, all '57 Fords were all new -- dramatically longer, lower, and wider, with "dream car" styling that looked like something from another brand. With all this, Ford exceeded its 1955 sales record while outproducing rival Chevrolet for the first time in decades. 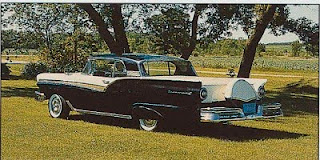 The 1957 Ford Fairlane 500 Skyliner had the first-ever retractable hardtop roof.

That new "retractable hardtop" was called Skyliner, a name borrowed from Ford's 1954-56 plexi-roof hardtop. Offered like the Sunliner in a new top-line Fairline 500 series, it was the sort of technical wonder Americans expected as the "space age" beckoned. At the touch of a button, a bevy of motors, relays, and wires raised a rear-hinged panel on an elongated deck, slid the top into a deep well, then closed the deck over it. Though quite complex and far from foolproof, this system was more reliable than was once reported, and the top's stately passage up or down was a surefire crowd-pleaser. 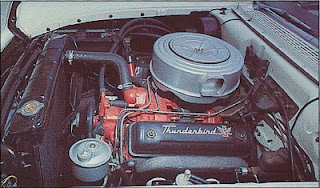 The 1957 Ford Fairlane 500 Skyliner was a pricey but popular model for Ford.

Luggage space was limited to a small box in the "trunk," and the added hardware made the Skyliner pricey for a Ford at $2942- -- $437 more than the Sunliner. Even so, the '57 Skyliner sold reasonably well at 20,766, though that was well down on the conventional convertible's 77,726. 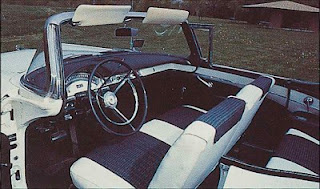 The 1957 Ford Fairlane 500 Skyliner had limited trunk space, thanks to the retractable roof.

Sales then tapered off, so the Skyliner was dropped after 1959 as a costly indulgence by money-conscious Ford execs. Today, though, a "retrac" still pulls crowds like nothing else.

A Fed Ex truck got back on its scheduled route Wednesday afternoon thanks to a good Samaritan.

The truck was stuck on an on ramp to Interstate 30 near Galloway when a driver single-handedly got the dual tractor-trailer unstuck and back on the road.

Josh Hammers, the Good Samaritan, said he was out Wednesday morning looking for stranded drivers when he came across the Fed Ex truck.

Hammers said he knew it was going to be a bigger challenge than a normal passenger vehicle, but he thought he'd at least give it a shot.

Ten minutes later, his Ford F-250 was tugging the truck back onto the road.

Hammers said a sand truck had passed by just minutes before, making it a little easier for his truck to get traction.

He added that this was just another example of why he's a Ford man.

"They do the job. My dad's got a '78 in the garage that he bought new, so we're definitely a family of Fords," Hammers said.

The Fed Ex truck was just one of several cars Josh pulled to safety on Thursday. He said it's something he does every time the weather gets bad.

“I just pay it forward," Hammers said. "If I was stuck out on the side of the road, I’d appreciate the help too, so just try to do the right thing."