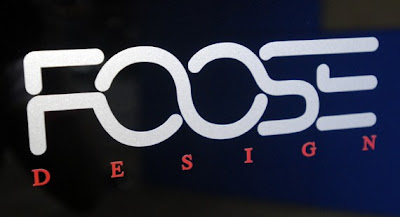 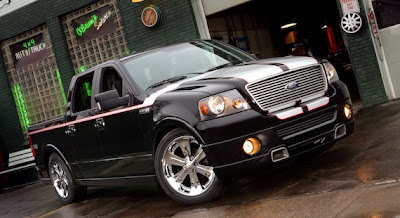 At last year’s Specialty Equipment Marketing Association Association convention, the Ford truck team issued Foose a challenge: “We asked [him] to design a tough, muscular street rod based on the Ford F-150 FX2 Sport pickup that will knock the socks off even the most hard-core boulevard cruiser fan,” says Ben Poore, Ford Truck group marketing manager. “And let’s make it available in less than a year before the 2007 SEMA show.” The process was easier than it sounds, Foose says, because he had a great canvas – the Ford F-150 – to work with. It was also a labor of love. Chip Foose’s personal primary ride is a souped-up 2005 Ford F-150 Lariat. 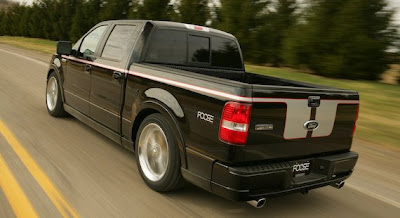 Less than five months later, Ford and Foose are revealing the low-slung, production-intent Ford F-150 Foose Edition show truck, a precursor to the truck that will bow in the fall of 2007 as the most powerful and fastest half-ton production truck on the planet. The intercooled, supercharged Triton® V-8 pumps out 450 horsepower at 5,200 rpm and 500 pounds-foot of torque at 4,000 rpm.

The 2008 Ford F-150 Foose Edition will begin life as an FX2 Sport model from the Kansas City Assembly Plant. The unique Foose elements will be customized at a modification center before being shipped to Ford dealers. The truck will go on sale by early 2008.
Posted by Pw3680 at 1:32 PM