Thank you to all who came out to the 26th F100 Western Nationals on June 21, 2008. It was HOT in more ways then one and the quality of the trucks were OUTSTANDING!! 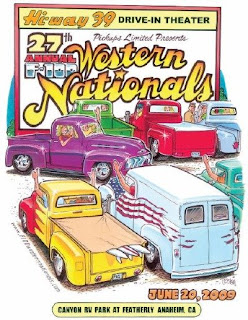 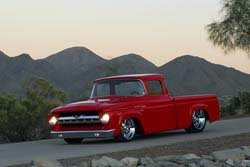 On Friday June 19th the "Jeff's Cruise" we leave the Ayres hotel at 9am and head to Pomona’s NHRA Museum. Cruise will end at John Force Race Station for a guided tour. Check out Fridays run at Youtube .

A very special thank you to all of our 2008 sponsors. Click Here for their Web Site

2008 Ford F-100 Western Nationals - F-100 Western Nationals
26 Years And Still Shiftin' Gears
By John Gilbert
Photography by John Gilbert
The 26th Annual F-100 Nationals took place on the first day of summer 2008 in Corona, California at what the old-timers refer to as Featherly Park. The event was hosted by Pickups Limited of Orange County, an F-100 club (the oldest of seven chapters) that was started in Orange County, California way back in 1968 when Lee Hill placed an advertisement in the Pennysaver, a local giveaway publication.

This year, prior to the big Saturday show, Pickups Limited organized a beach cruise on Friday afternoon that led over 25 trucks down to Newport Beach, and then back up to John Force's Racestation for a tour of John's very cool museum. After checking out John's place most of the out-of-town folks cruised that last couple of miles back to the Ayres Hotel in Anaheim Hills, and then called it a day a very fun day. For information regarding next year's show please check out www.pickupslimited.com.

This '56 F-100 Big-Window was bought new in Corona, CA and was used daily as a work truck until '72. It remains in the family of the original owner. 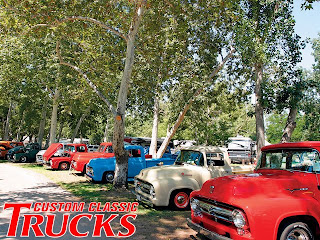