The engine in your car runs best at a fairly high temperature. When the engine is cold, components wear out faster, and the engine is less efficient and emits more pollution. So another important job of the cooling system is to allow the engine to heat up as quickly as possible, and then to keep the engine at a constant temperature. 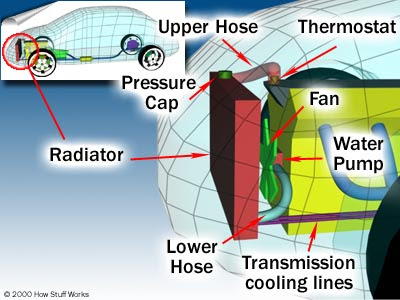 Diagram of a cooling system: how the plumbing is connected

In this article, we'll learn about the parts of a car cooling system and how they work. First, let's look at some basics.

I­nside your car's engine, fuel is constantly burning. A lot of the heat from this combustion goes right out the exhaust system, but some of it soaks into the engine, heating it up. The engine runs best when its coolant is about 200 degrees Fahrenheit (93 degrees Celsius). At this temperature:

The combustion chamber is hot enough to completely vaporize the fuel, providing better combustion and reducing emissions.
The oil used to lubricate the engine has a lower viscosity (it is thinner), so the engine parts move more freely and the engine wastes less power moving its own components around.

There are two types of cooling systems found on cars: liquid-cooled and air-cooled.

Some older cars, and very few modern cars, are air-cooled. Instead of circulating fluid through the engine, the engine block is covered in aluminum fins that conduct the heat away from the cylinder. A powerful fan forces air over these fins, which cools the engine by transferring the heat to the air.

Since most cars are liquid-cooled, we will focus on that system in this article.

­­The cooling system in your car has a lot of plumbing. We'll start at the pump and work our way through the system, and in the next sections we'll talk about each part of the system in more detail.

There is also a separate circuit for the heating system. This circuit takes fluid from the cylinder head and passes it through a heater core and then back to the pump.

­Cars operate in a wide variety of temperatures, from well below freezing to we­ll over 100 F (38 C). So whatever fluid is used to cool the engine has to have a very low freezing point, a high boiling point, and it has to have the capacity to hold a lot of heat.

Water is one of the most effective fluids for holding heat, but water freezes at too high a temperature to be used in car engines. The fluid that most cars use is a mixture of water and ethylene glycol (C2H6O2), also known as antifreeze. By adding ethylene glycol to water, the boiling and freezing points are improved significantly.

The temperature of the coolant can sometimes reach 250 to 275 F (121 to 135 C). Even with ethylene glycol added, these temperatures would boil the coolant, so something additional must be done to raise its boiling point.

Water Pump
­
­The water pump is a simple centrifugal pump driven by a belt connected to the crankshaft of the engine. The pump circulates fluid whenever the engine is running.

A centrifugal pump like the one used in your car

The fluid leaving the pump flows first through the engine block and cylinder head, then into the radiator and finally back to the pump.

The engine block and cylinder head have many passageways cast or mach­ined in them to allow for fluid flow. These passageways direct the coolant to the most critical areas of the engine. 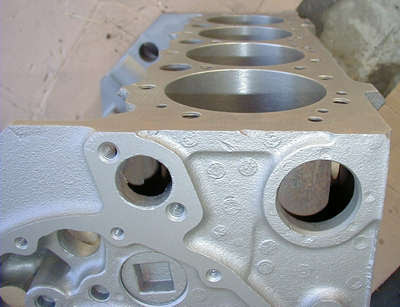 Note that the walls of the cylinder are quite thin, and that the engine block is mostly hollow.

Temperatures in the combustion chamber of the engine can reach 4,500 F (2,500 C), so cooling the area around the cylinders is critical. Areas around the exhaust valves are especially crucial, and almost all of the space inside the cylinder head around the valves that is not needed for structure is filled with coolant. If the engine goes without cooling for very long, it can seize. When this happens, the metal has actually gotten hot enough for the piston to weld itself to the cylinder. This usually means the complete destruction of the engine.

The head of the engine also has large coolant passageways.

One interesting way to reduce the demands on the cooling system is to reduce the amount of heat that is transferred from the combustion chamber to the metal parts of the engine. Some engines do this by coating the inside of the top of the cylinder head with a thin layer of ceramic. Ceramic is a poor conductor of heat, so less heat is conducted through to the metal and more passes out of the exhaust.

­A radiator is a type of heat exchanger. It is designed to transfer heat from the hot coolant that flows through it to the air blown through it by the fan.

Most modern cars use aluminum radiators. These radiators are made by brazing thin aluminum fins to flattened aluminum tubes. The coolant flows from the inlet to the outlet through many tubes mounted in a parallel arrangement. The fins conduct the heat from the tubes and transfer it to the air flowing through the radiator. 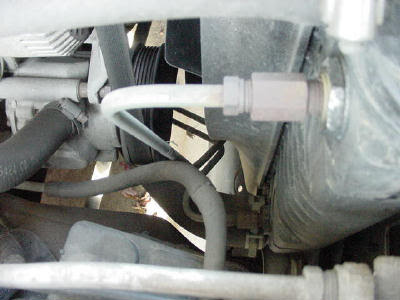 Picture of radiator showing side tank with cooler

­­The thermostat's main job is to allow the engine to heat up quickly, and then to keep the engine at a constant temperature. It does this by regulating the amount of water that goes through the radiator. At low temperatures, the outlet to the radiator is completely blocked -- all of the coolant is recirculated back through the engine.

The open and closed positions of a thermostat

If you ever have the chance to test one, a thermostat is an amazing thing to watch because what it does seems impossible. You can put one in a pot of boiling water on the stove. As it heats up, its valve opens about an inch, apparently by magic! If you'd like to try this yourself, go to a car parts store and buy one for a couple of bucks.

The secret of the thermostat lies in the small cylinder located on the engine-side of the device. This cylinder is filled with a wax that begins to melt at around 180 F (different thermostats open at different temperatures, but 180 F is a common one). A rod connected to the valve presses into this wax. When the wax melts, it expands significantly, pushing the rod out of the cylinder and opening the valve. If you have read How Thermometers Work and done the experiment with the bottle and the straw, you have seen this process in action -- the wax just expands a good bit more because it is changing from a solid to a liquid in addition to expanding from the heat.

This same technique is used in automatic openers for greenhouse vents and skylights. In these devices, the wax melts at a lower temperature.

Fan
­ L­ike the thermostat, the cooling fan has to be controlled so that it allows the engine to maintain a constant temperature.

Front-wheel drive cars have electric fans because the engine is usually mounted transversely, meaning the output of the engine points toward the side of the car. The fans are controlled either with a thermostatic switch or by the engine computer, and they turn on when the temperature of the coolant goes above a set point. They turn back off when the temperature drops below that point. 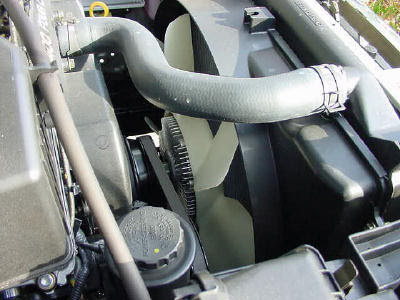 ­­You may have heard the advice that if you car is overheating, open all the windows and run the heater with the fan going at full blast. This is because the heating system is actually a secondary cooling system that mirrors the main cooling system on your car. 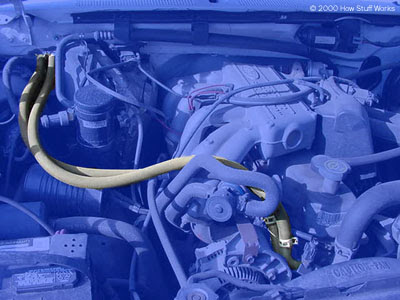 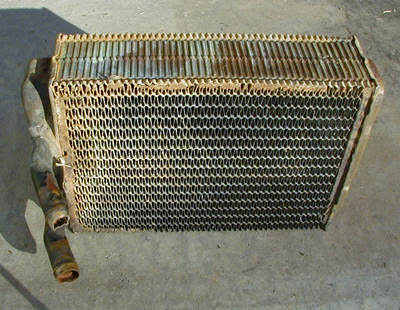 The heater core draws its hot coolant from the cylinder head and returns it to the pump -- so the heater works regardless of whether the thermostat is open or closed.
Posted by Pw3680 at 12:38 PM

Just admiring your work and wondering how you managed this blog so well. It’s so remarkable that I can't afford to not go through this valuable information whenever I surf the internet!
vacnjet.com

Thanks for sharing this information. Find out the best manufacture and distribution of aftermarket cooling products for automotive engine cooling system. Getting touch with us on reachcooling.com

Thanks for sharing this information. Find out the best manufacture and distribution of aftermarket cooling products for automotive radiator. Getting touch with us on reachcooling.com

Wat happens to yout car if your cap is broke

Wat happens to yout car if your cap is broke