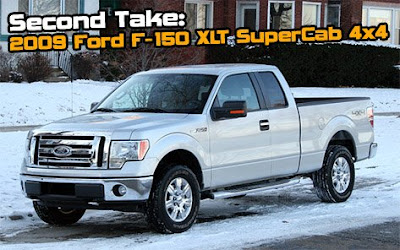 PickupTrucks.com has extensively covered Ford's redesigned F-150, and I recently had a chance to test an extended-cab model to see just how usable its rear bench seat is. I had an XLT SuperCab model with a 6.5-foot cargo box and four-wheel drive. The base price was $32,100, but a number of optional features -- including the 5.4-liter V-8 engine -- pushed the as-tested price to $38,135.

Like other extended-cab full-size trucks, Ford makes it easier to get to the backseat by including rear-hinged back doors on both the driver and passenger sides of the truck. The front doors have to be open for the rear ones to swing out, which they’ll do up to about 90 degrees. The ones in the Chevrolet Silverado and Nissan Titan, by comparison, swing almost 180 degrees if needed, nearly coming to rest against the side of the cargo box. 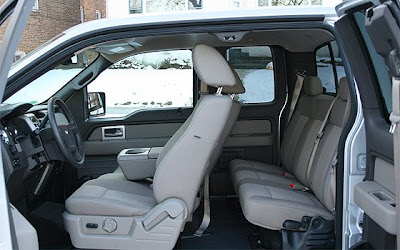 Once the doors are open, it's pretty easy to get into the back of the F-150 SuperCab. I appreciated the running boards, which are beneficial even for taller folks when getting in a high-riding truck like this (I'm just over 6 feet tall).

With the driver's seat adjusted for me, there isn't a lot of extra room in the backseat. While my legs were pressed slightly into the back of the front seats, the bigger impediments to comfort are the bottom seat cushion and the backrest. The seat cushion is low to the ground -- making for an unnatural, knees-up seating position --and it's not especially large, which means it doesn’t provide much thigh support for taller passengers like me. As for the backrest, it's pressed up against the rear of the cab and not reclined all that much.

Granted, the F-150 SuperCab's legroom and headroom numbers for rear passengers are similar to other extended-cab full-size trucks, but if you plan on regularly carrying taller passengers with you in back -- whether co-workers or children -- you might want to seriously consider a SuperCrew model. They'll thank you for it -- or at least won't be as likely to complain. 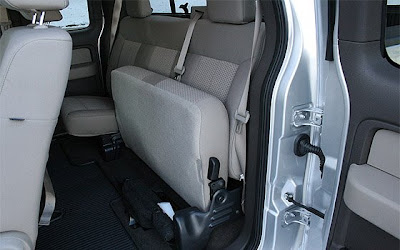 If you're considering the F-150 SuperCab, you may be more interested in how the space behind the front seats can be used for storage. The rear seat cushion is split 60/40 and can be tilted upward against the backrest when not in use. Positioned this way, there's enough room for more than a few bags if you're willing to stack them. There are a couple of issues, though, with the setup.

While I'm impressed with how easy and manageable the redesigned F-150 is to drive -- whether cruising on the highway or negotiating a parking garage -- when it comes to the back of the cab, Ford missed a few opportunities to match some of the features of its extended-cab rivals. 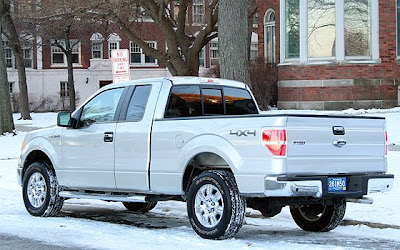