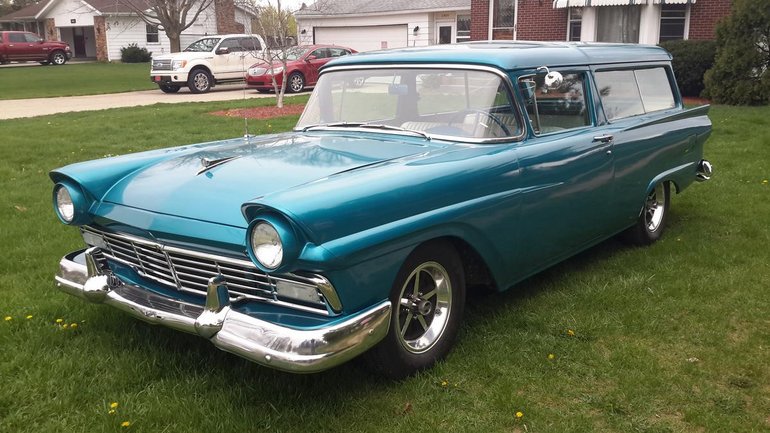 They’re considered some of the rarest Mustangs ever built, but more importantly they’re also the very first vehicles to arise out of Ford’s Special Vehicle Operations division, and now the serial No. 1 Mustang M-81 and the McLaren Mustang IMSA car will head to auction as a pair.
While the Fox-body Mustang debuted in 1979 with a 302-cu.in. V-8 still under the hood, the oil crisis of that same year forced Ford to rethink its engine lineup for the early Eighties: Even the 302 was considered too big, so Ford replaced it with a 119-hp, 255-cu.in. V-8 and decided to focus on the 150-hp, turbocharged 2.3-liter four-cylinder as its main performance engine.
To convince V-8 fans that a turbo four could perform, Ford decided to resurrect its racing program and sought the help of McLaren Engines, based out of nearby Livonia, Michigan. Under the supervision of new SVO director Michael Kranefuss, Ford designers Todd Gerstenberger and Harry Wykes collaborated on a more radical Mustang design with flared fenders, closed-off grille, massive airdam and aggressive vented hood, while McLaren’s engineers went about blueprinting and balancing the four-cylinder. Crucially, they also fitted the engine with variable boost control, allowing anywhere from 5 to 11 psi; toward the top end of that range, the tweaked four-cylinder was rated at 175 horsepower.

Stiffer springs, a bigger sway bar lifted from the police-package Fairmont, 15-inch wheels, brakes lifted from the V-8 Mustang, and Recaro buckets all rounded out the package. Ford dubbed it the M-81 and considered selling about 250 completed cars, along with components available through its dealerships so Mustang customers could build their own.
That was just for the street version, however. Ford also intended to take the Mustang racing, specifically in IMSA’s GTO series, and did so through a McLaren-built Mustang that looked much like the M-81, but was powered by a Cosworth four-cylinder engine good for as much as 350 horsepower. According to John Craft’s Mustang Race Cars, the McLaren IMSA Mustang’s first outing at the 1981 24 Hours of Daytona resulted in a GT Prototype win.

While the M-81 netted Ford plenty of magazine coverage at the time, the goal of selling 250 of the cars proved just a bit optimistic. Their $25,000 price tag – at a time when the base Mustang started at less than $5,000 – was too much to swallow. As a result, Ford built just 10 M-81s (not including the prototype), and commissioned just two of the IMSA cars.
SVO, of course, later built the 1984-1986 Ford Mustang SVO, another turbocharged four-cylinder version of the Fox Mustang, and eventually morphed into Ford’s Special Vehicles Team with John Coletti at the helm.
One of each of those first SVO Mustangs, both of them carrying serial number 001, will cross the block as part of Mecum’s Indianapolis auction. According to the descriptions, the McLaren IMSA Mustang comes with plenty of documentation, while the M-81 has just 79 miles on it and hasn’t been driven in more than 30 years. No pre-auction estimates for the two were available; the closest comparable sale in recent years was that of a V-8-powered 1980 Mustang GT Enduro, which sold for $40,700 at auction last fall.
The Mecum Indianapolis auction will take place May 17-21 at the Indiana State Fairgrounds. For more information, visit Mecum.com.
UPDATE (23.May 2016): The race-prepped IMSA Mustang bid to a high of $35,000, while its road-going stablemate reached a high bid of $50,000. Neither car met its reserve price.
Source: blog.hemmings.com
Posted by Pw3680 at 4:46 PM No comments:

#9.  1987 Fox
The “Fox” Mustang, known as such because it was built on Ford’s “Fox” platform.  The Fox followed the original Mustang’s philosophy of cheap and fun to the proverbial “t.”  You can’t help but love the “5,0” badges on the sides, too.  Makes me think of Vanilla Ice’s song, Ice Ice Baby… “rollin’ in my 5.0, with my rag top down so my hair can blow…”  You know you know it too.

#8.  2011 Shelby GT 350
The GT 500 may have returned a few years ago, but the most iconic Shelby of all time is still the original GT 350, and we all secretly wanted a resurrection of that name.  The 2011 GT 350 is the fastest production Shelby Mustang in history too, sporting carefully refined everything and putting out as many as 624 horses.  As a bonus, it comes in white with guardsman blue stripes,because you wouldn’t want it in any other color.

#6.  1970 Boss 302
The 1970 Boss 302 is one sick-looking muscle car, Ford certainly hit the nail on the head when it came to style with this one.  But the Boss 302 isn’t just about looking good because this car was built to do just one thing:  destroy the Chevy Camaro Z28 on the SCCA Trans Am series, and it did just that.

#5.  1970 Boss 429
Mustang plus race-ready V8 and suspension equals win.  The Boss 429 set the pace for the high-performance models to follow, and we are surely thankful.  Along with all that performance, the Boss 429 has the visual appeal that you’ve come to expect from a Mustang.

#4.  2003 SVT Cobra
It’s called “The Terminator.”  That’s because it set a new benchmark.  This Mustang was not only capable of shooting down its competition in a straight line, but the well-sorted suspension (complete with the now-missing independent rear-suspension) allowed it to be a fierce competitor on the track as well.

#3.  1965 Shelby GT 350
Almost immediately after the introduction of the Mustang, Carroll Shelby started tinkering with it.  Since then, magical things have happened whenever his hand has been involved.  This was a race car with turn signals, and it kicked many an ass in production car races.

#1.  1964.5 Mustang Mk. l
Without this one, there wouldn’t be any of these other ‘stangs.  The first Mustang was released five months before the start of the 1965 production year, leaving it in an unusual middle ground between ’64 and ’65.  As such, this car is known as the 1964.5 Mustang.  The 1964.5 Mustang started the cheap, powerful, and cheerful party in the US.  If only a new Mustang still cost just $2,300.
Source: legendaryvideos.com

10 Best Selling Cars Ever! I Bet You’ve Owned A Car On This List!

#10.  Ford Taurus
The Ford Taurus was the first front wheel drive vehicle produced by Ford.  It became an instant hit among car buyers and became the number one selling car in America between 1992 and 1996.  The Taurus was removed from production in 1996 only to be brought back a year later due to overwhelming consumer demand.  Currently in its sixth generation, the Taurus continues to be a strong seller with over 7.8 million units sold since its initial release.

#9.  Oldsmobile 88
Introduced in 1949 and removed from production in 1999, the Oldsmobile 88 is the 9th highest selling car in U.S. history with 8.8 million units sold. Much of the cars success was due to its appeal with the younger generation.  They helped propel the Oldsmobile 88’s sales upon its first release and continued to support the car until the end of its run in 1999.

#8.  Ford Mustang
Introduced at the New York World’s Fair on April 17, 1964, the Mustang was instantly successful, selling 685,989 units by the end of 1965.  The Mustang is one of the most iconic American muscle cars, with dozens of Muscle car clubs and a very prominent role in American cinema and TV.  In total the Mustang has sold over 9.4 million units and remains just as popular today.

#7.  Ford Focus
The Ford Focus was released as a replacement for the Ford Escort.  With high gas mileage and low cost, it’s no surprise the Focus sells as well as it does.  The Ford Focus has proved it’s more than just a plain commuter car by selling over ten million units to date.

#6.  Oldsmobile Cutlass
The Oldsmobile company labeled a large number of their cars with the Cutlass badge, many of them were very different from one another.  The model most remember and praise is the Cutlass Supreme, this mid-size car was the best selling passenger car of 1976.  By the end of its life in 1999 the Cutlass Supreme had sold 11.9 million units.

#4.  Ford Model T
Selling 16.5 million units in its 19 year lifespan puts the Ford Model T at number 4 on this list of the best selling cars of all time.  Known as the “Tin Lizzie,” the Model T was introduced to the world in 1908.  The Model T was the first car that was made affordable for all classes and it paved the way for all the car we see on the roads today.

#3.  Ford Fiesta
The Ford Fiesta has been in production since 1976 and is currently in its 7th generation.  The Ford Fiesta has sold over 16.5 million units making it one of Ford’s best selling models.  In 1998, the Fiesta was given a minor face-life aimed at giving it a new, edgier look and again in 2006 in order to keep up with the ever-changing technological times.

#2.  Ford Escort
Originally designed and sold in Europe, the Ford Escort debuted in 1968, but wasn’t released in the United States until 1980, as a replacement for the Ford Pinto.  Eventually succeeded by the Ford Focus in 1999, the escort continued production until 2002.  By the end of its production life the Escort had sold over 20 million units.

#1.  Ford F-Series Pickup Truck
Ford’s flagship truck is still topping the sales charts 65 years after it was first released.  The F-Series truck is the best-selling truck in the world and continually receives award and accolades because of that.  There’s nothing too fancy about the F-series, it doesn’t pretend to be something it’s not.  It takes pride in being a rugged workhorse that’s tough as nails.  That attitude, plus the performance and dependability that only comes with the Ford name, is why The F-Series is the number one, best selling American made car of all time.  Congrats, Ford.
Source: legendaryvideos.com

Labels: 10 Best Selling Cars Ever!, I Bet You’ve Owned A Car On This List!

1956 Ford Race Car
The egg crate grille featured on the 1955 cars were widened into a series of rectangles for 1956. The 1956 Race car, painted with the orange blossom color, has 8 cylinder engine and manual 4 speed transmission.

1965 Ford Mustang Fastback
The first-generation Ford Mustang was manufactured by Ford from March 1964 until 1973. 1965 was the first year the Mustang was available with a Fastback model and a 289 cu in (4.7 L) engine.

1936 Ford Coupe
1936 Ford Coupe is Chip Foose Designed and Hand formed in Metal by Marcel De LeyTruly. It is aa masterpiece of hot rod design and elegance, Impression still appears at various car shows across the country. It serves as a benchmark of success for all the hard work done at Foose Design.

1939 Ford Hot Rod Coupe
Hot rods are typically old, classic American cars with large engines modified for linear speed. The origin of the term “hot rod” is unclear. A possible origin includes replacement of the camshaft with a new (“hotter”) version, sometimes known as a hot stick or hot rod. This custom 1939 Ford Hot Rod Coupe looks amazing with the dark orange flames like design on it.

1968 Ford Mustang Fastback
The 1968 Ford Mustang GT Fastback reached iconic status after it was featured in the 1968 film Bullitt, starring Steve McQueen. In the film, McQueen drove a modified 1968 Mustang GT 2+2 Fastback. Two vehicles were used in the filming of the movie and only one is still in existence today.

1979 Ford Mustang Cobra
A Cobra appearance option was available on the base model (17,579 produced in 1979) at extra cost through 1981. The Cobra featured black lower body side paint, colored coordinated pinstripes in the wraparound body side moldings and bumper grooves, a snake decal for the hood and Cobra lettering on the doors.

1956 Ford Convertible “Dreamsicle Orange”
A 1956 Ford 312, hopped up a little with a Red’s 3/4-race camshaft and headers, was dressed up with a fair amount of chrome and color. The engine mates to a 1967 Mustang Top loader trans. Carriage House does concours-quality paint jobs, and the “Dreamsicle” orange color sprayed on Bill’s Ford is a custom mix.
Source: legendaryvideos.com