Do You Remember These Ford Cars With Fender Skirts or Spats?

Fender skirts, known in Australia and the United Kingdom as spats, are pieces of bodywork that cover the upper portions of the rear tires of an automobile. They are typically detachable to allow for tire changes.

They are implemented for both aesthetic and aerodynamic reasons. Rather than air flowing into and being trapped in the rear wheel well, it flows smoothly over the bodywork. Automakers have also experimented with front wheel fender skirts, as on the 1950-1954 Nash Rambler, but with success limited by the fact that the front wheels must pivot for steering.

Fender skirts were first seen on the Chrysler Airflow and spread to many American cars in the 1940s. By the 1970s, they began to disappear. Fender skirts remained for some time longer on a few cars, particularly large American luxury cars.

They were often paired with whitewall tires. The extent of the skirt also varied, before the 50s it was common for all but the bottom inches of the rear tire to be covered, while by the 60s fender skirts only covered a few inches of the top of the tire and were largely absent afterwards. 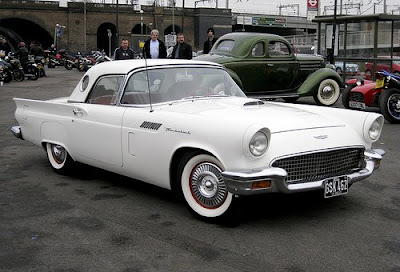