So How Different Is Ford's New Ponycar Compared with the Outgoing Model? We Chart the Changes

Our full First Drive story on the 2010 Ford Mustang hits this weekend, complete with driving impressions and a couple of sweet videos (burnouts, anyone?), but we decided to address some of the grumblings we've been hearing from out in Mustangland. After we gave you the First Look at the 2010 Mustang, we received comments that it looked like not much has changed.

Actually a lot has, but decide for yourself when you take a look at the similarities and differences between the 2009 and 2010 Mustang.

Dimensions: Overall dimensions are nearly identical. Any changes are due only to the new sheetmetal and plastics -- and are within millimeters. Dimensions that might substantially alter handling, such as track width and wheelbase, have not changed. 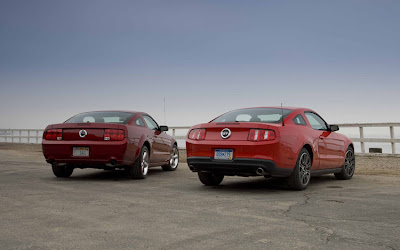 Powertrain: As mentioned in our earlier story, though the body is new, the engine and transmissions for the V-6 and V-8 are not. Mustang V-6 still has 4.0L V-6 that produces 210 hp and 240 lb-ft of torque. Mustang GT offers the same 4.6L, overhead cam V-8 as in the past, but this one now makes 315 hp and 325 lb-ft of torque. Both are increases of 15 and 5 hp, respectively -- primarily due to a change in the air intake and engine redline. Transmissions offerings are the same: five-speed manual and five-speed automatic.

Suspension: The live rear axle stays. Some, like the drag racers, will cheer. Others will turn up their noses and hope for independence in the future. The bottom line is that Ford thinks most buyers won't care. Plus, it's cheaper.

Emblem: Though very subtle, the iconic pony emblem has been revised for the 2010 Mustang. It's now a bit crisper looking, with a few differences to the shape and angle of the neck and head. Coloration is different too. V-6 Mustangs get a traditional chrome pony, while Mustang GTs get a dark-chrome version.


Sheetmetal: This is perhaps the biggest change. Every panel, except for the roof, has been changed. 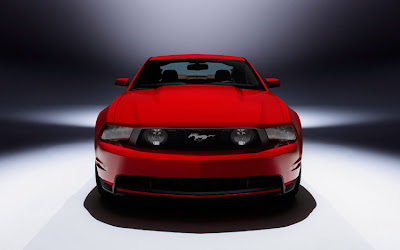 Front: The grille is less vertical, raking forward to create a more aggressive nose. The hood now has what Ford calls a "power dome," which we take to mean the character lines and stepped-up center section that hints at cowl induction.

Side: The front fenders look to be trimmed up (as though liposuctioned a bit), but the real news is at the rear: 2010 Mustangs have hips! They flare up just at the door seam to break what was a continuous beltline. Ford stylists say it gives the car a lower stance, as though the car is ready to pounce, but a few on our staff disagree. They say the new blackout rocker panels visually elevate the car as much as those hips lower it. Above these rockers is a signature cue retained from the 2009Mustang, the "hockey stick" character line that starts behind the front wheel and terminates at the rear fender.

Rear: Here is where Mustang designers made a huge difference. The flared fenders, new taillights (see below), and tilted forward rear deck with chamfered edges really shrink the size of the Mustangs rump. The redesign also gives character to what used to be a long, featureless rear end. When viewed from a rear three-quarter or hard side angle, the improvement is hard to miss. Problem is, neither is that new and much larger circular emblem.

Lights: The eyes have it and up front, the headlights are a nod to the 1970 Mustang, though the twin stacked vent/turn signal has been positioned to the inside of the light, instead of on the outside corner. At the rear, Ford has wisely kept the traditional three-bar vertical arrangement, but added another retro twist: The LEDs inside fire sequentially when the turn signal is engaged.

Aero: While much of the new styling was done to keep the retro feel, Ford stylists also wanted to improve aerodynamics and reduce wind noise. So they also made a number of subtle tweaks that you'd have to look hard to see. For instance, the radio antenna, which used to be up front by the A-pillar, has now been moved to the rear fender. Side mirrors were heavily reworked, while the windshield wipers were made flatter and squirters moved from the top of the hood to under the rear edge.

Interior: Second only to the exterior changes is what Ford's design team did with the interior. While it's not quite an Extreme Makeover, Mustang Edition in here, the changes are sweeping and noticeable right from the start.

As with the exterior, there was no drastic change in the styling direction of the interior. It's still an exercise in contrast. Our GT had black dash and door surfaces, offset by tastefully executed aluminum panels and chromed plastic trim rings. The biggest change? Gone is the creaky, hard plastic dash. In its place is a much softer, one-piece unit molded from thermoplastic olefin (TPO). Ford claims going from multipiece to single and hard plastic to TPO cures the creaks and squeaks of the previous Mustang. We won't know until we spend more time with the car, but at the very least, the new panel is much nicer underhand. Other upgrades: the e-brake handle appears less bulky and is positioned back a touch. A/C vents are now circular at the sides and rectangular above the radio/HVAC controls (both of which feature much nicer buttons and knobs). Cruise control buttons are now joined by audio controls on the steering wheel, flanking a much classier metallic galloping horse emblem (which replaces the cheap plastic GT disk). Another pleasant touch, there is now a hood release button just ahead of the shift lever. The interior of the 2010 Mustang is a far nicer place to be in than the old one; the materials all have a high quality feel to them, which gives the impression that the cabin is better built and more refined.

Tech: As with much of the Ford lineup, Mustang receives Sync -- the voice-activated communication and entertainment system Ford developed with Microsoft. Bluetooth connectivity is now an option as well. Mustangs can now be had with dual zone climate control as well as a reverse camera. Like all new Fords, refueling is made a bit easier with the EasyFuel capless fuel-filler system. Last but not least, Mustang now has AdvanceTrac electronic stability control standard on all models. On GT Premium models, Ford says this system offers a unique calibration that allows for more spirited (read: sideways) driving. The system supposedly allows for burnouts too. We'll see.
Posted by Pw3680 at 9:49 AM