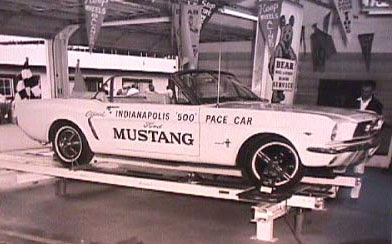 Three 1964 1/2 convertibles were built with the sole purpose of pacing the 1964 Indianapolis 500. These three cars were sent directly from the factory to Holman & Moody in North Carolina to be specially modified for pace car duties. These modifications included extensive work to the 289cid engines, the installation of a Borg-Warner 4-speed transmission, and lowered suspension with differently valved shocks on each side of the car to accommodate the banked turns of the Indianapolis Speedway, and high-speed rated tires. The cars were all painted Wimbledon White. On race day only 2 of these cars actually made the parade lap, as the third ran into mechanical difficulties. The fate of these three specially built convertibles is unknown, but there have been rumors that one of these cars is now in the hands of an MCA judge. However, at this point the Registry has not been able to confirm that this car is actually one of the original 3 pace cars.

In addition, thirty five convertibles were used as dignitary cars during the festivities of the Indy 500. Due to a shortage of Mustangs available from the factory, these 35 were pulled from dealer lots to fill the need. All of these cars were D-code cars (289 cid V8, 4-barrel, 210 hp) in Wimbledon White with either red, white or blue interiors. After the race these cars were auctioned off to dealerships and absorbed into the general population, instead of being made available for sale as special edition cars. Unfortunately, the location and identity of only one of these convertibles is known today. 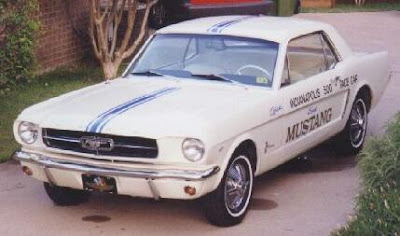 Ford put on a special competition between dealerships in order to distribute the planned pace car replicas to be released for sale to the public. The competition consisted of "Checkered Flag" and "Green Flag" contests that were based on the sales performance of the dealerships prior to the April 17, 1964 introduction of the Mustang. The top five performers in each district would receive a pace car replica for free, or at a significant discount, based on their final standings in the sales contest. With 36 districts this added up to 180 replicas, however, because of dealership ties and strong performances, approximately 10 extra replicas were made, bringing the total to an estimated 190. Representatives from the 105 winning dealerships were invited to Dearborn for a special celebration, where the keys to their replicas were handed over by Mr. Lee Iacocca himself.
Each of the replicas were coupes painted in Pace Car White (paint code "C" for 64 1/2) and had white interiors with blue appointments (code "42"). The cars were equipped with the 260 V8 engine, power steering, rear back-up lights and automatic transmissions. Other identifying features of the pace car replicas include pace car blue racing stripes up the center of the hood and "Official Pace Car" decals along the sides of the car. The words "PACE CAR" were written on the radiator support with a grease pencil of some kind, and then later painted over. The center stripes did not get placed on the taillight panel around the gas cap on coupes, but they did on the dignitary convertibles. Apparently some cars did not have the decals installed at the dealership, and due to a press photo showing a prototype with the stripes installed to one side rather than down the middle a few cars ended up with the stripes in this incorrect location. 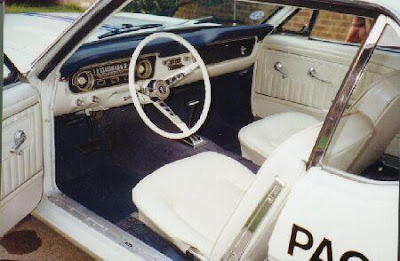 Another interesting fact with regards to the replica cars was the lack of outside mirrors. Standard procedure at the time was for cars to be delivered to the dealerships with the outside mirrors placed loose inside the car. When the car was prepped by the dealership the mirrors were then installed. However, the pace car replicas were not delivered the same way as regular Mustangs... the Checkered Flag cars were retrieved by the winning dealers from Dearborn, and the Green Flag cars were retireved from the District Sales Office by the dealer. This meant that these cars did not end up with an outside mirror.

The VINs of the cars are sequentially numbered, but the DSOs reflect the dealerships that they were sent too. All of the replicas were built in April, except for the extras mentioned earlier that were built in May, and given a DSO of 84 ("Home Office" designation). 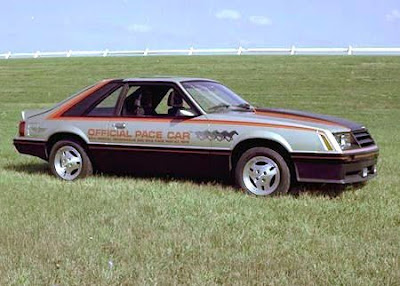 The Ford Mustang had a new design for the year of 1979, and Ford looked for anyway possible to promote the new Pony. After negotiations with the Indianapolis Motor Speedway, it was agreed that the 1979 Mustang would become the official Pace Car for the 63rd Annual Indianapolis 500 mile race. Because of the major publicity gained from the Indy 500, Ford set out 10,478 replicas of the Pace Car available to the public. These Mustangs carried much of the same uniqueness that the originals had, including: non-standard issue pewter and black paint treatment; unique orange and red accent striping and pace car decal package (buyer had the option of having the "Official Pace Car" decals installed on the side or just left in a box in the back of the car); a raised, nonfunctional Cowl Induction style hood; a revised blacked-out grill with horizontal bars; a front air dam with integral Marchal fog lights; and a unique 3 piece rear spoiler. All of the replicas included the TRX suspension and metric sized wheels and tires (Michelin TRX 190/65 390). 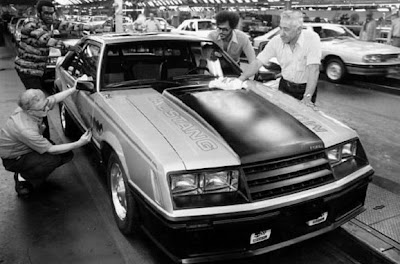 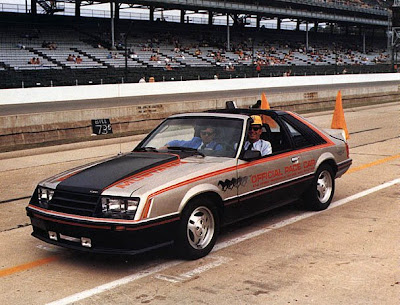 Interior features included black Recaro front seats with black and white checkered inserts - as well did the back seats. Also included in the interior was a leather wrapped sport steering wheel, a black simulated engine-turned instrument panel applique and an Indianapolis Motor Speedway plaque placed on the dash. The available engines included the 5.0L V8 (with either a 4spd or automatic) or the new 2.3L turbo (4 speed only.) Unfortunately, the Jack Roush prepared 302 in the actual pace car was not offered. Top speed in the 5.0L engine could only reach 140 because of it's 2V carbeurator and single exhaust, and the turbo 4 topped at 137mph. Because the country was in the midst of the late 70's fuel shortage and Ford was pushing turbo power over the V8, about 1500 more 2.3L were sold than its 5.0L big brother (5970 2.3L, 4508 5.0L of which 2106 were Auto and 2402 were 4spd). 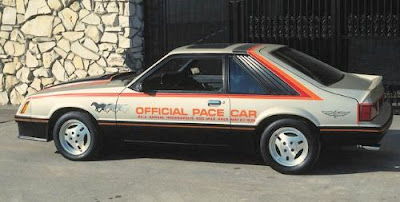 The engine in the actual pace car featured a host of performance parts and was built by renowned engine tuner Jack Roush. A hot engine was necessary because the pace car had to fulfill a requirement of accelerating from a steady speed of 90 MPH midway through the fourth turn to 110 MPH by the time it pulled off the track and into pit road. Naturally the brakes were uprated too, using semi-metallic linings from the Fairmont Police Package. Besides the engine modifications the car also featured strobe lights in the fog and tail lights and a custom made t-top configuration (only a pop-up sunroof was available on the replica) was created to give the crowd and photographers a better view of the interior and driver as the car circles the track at the start of the race. The driving duties were handled by famous Grand Prix racing driver and then Ford pitchman Jackie Stewart. 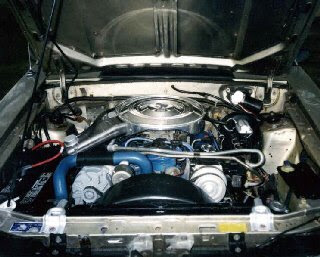 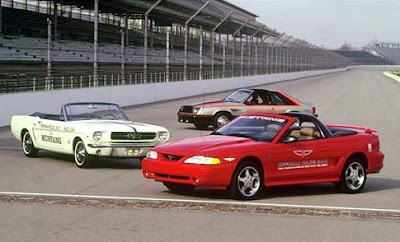 In '94, Ford produced 1,000 Cobra convertibles, all of them being Indy Pace Car replicas. Jack Roush was once again the designer of the Pace Car, and once again Parnelli Jones drove the Pace Car around the track. All of the replicas were painted Rio Red and came with 5-speed transmissions, although the actual pace car was an automatic. 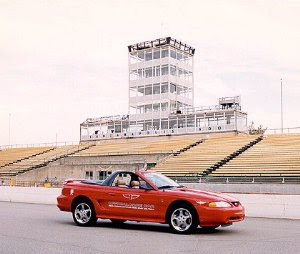 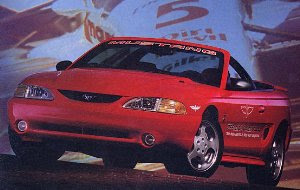 The interior featured tan leather along with the Indy Speedway "Wings" embossed on the headrests of the front seats. A Shelby-type roll bar was also added to the replicas in order to hose the flashing light unit. 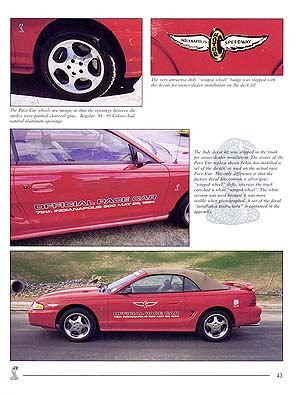 The replica's rims were the identical to the Cobra's except for the recessed potions being painted charcoal. The "Official Pace Car" lettering as well as the "wings" decals were dealer installed.
Posted by Pw3680 at 3:31 PM