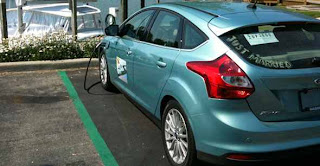 When a young engineer named Roy Chapin completed the first-ever drive from Detroit to New York City in 1901, he showed the world that the automobile—then a fledgling machine—could be used for more than jaunts around town. In summer 2012, University of Illinois engineering professor Ty Newell retraced that historic road trip in his gas-free Focus Electric to bring similar attention to the cross-country capabilities of Electric Vehicles.

Newell, 60, and his wife, Debra, picked up their Focus Electric in Wantagh, N.Y. on July 3. The couple ventured westward in a reverse version of Chapin’s route, traveling through the state of New York and across Canada to Detroit, before ultimately returning home to Urbana, Ill. The Newells' trip spanned 1,650 miles, and their use of the MyFord Mobile app and websites such as Plugshare.com steered them to battery charging stations along the way.

“We wanted to show that electric vehicles are not restricted,” says Newell, who not only teaches resource conservation but also lives it. (His self-constructed home is completely solar-powered.)

The 76-mile driving range and four-hour charge time (using a 240-volt charging station) of Focus Electric helped attract Newell to the car. Along with, of course, the fuel savings. “It’s one of the best performing cars I’ve driven,” Newell says. “And it’s oil-free. To me, that says it all.”

The trip’s many highlights included a stop at the former location of Thomas Edison’s first power plant and a renewal of the couple’s wedding vows at the camp where they first met. The Newells also received a tour of the Ford Michigan Assembly Plant in Wayne, Mich., where Automotive Hall of Fame President Bill Chapin, Roy Chapin’s grandson, greeted them.

Although the ride back in 1901 predated gas pumps and paved roads, Bill Chapin notes similarities between that trip and Ty Newell’s. “My grandfather’s journey, like Ty’s, was larger than the trip itself,” he says. Plus, neither made a single gas station stop.