This Focus isn't Subtle, but Boy is it Ever Exhilarating 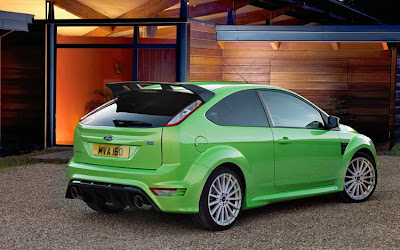 A car like Ford Focus RS would never have been conceived in these times. It's an overhang of the years of optimism that suddenly terminated last fall. Look at the size of the RS's twin tailpipes, exhaling like storm drains from the rear bumper. See the giant gills gulping air to the intercooler below the front license plate. Check the swollen wheel arches, the ground-hugging stance, the 19-inch wheels and the rear spoiler like a bomber's wingspan.

So let us, the car-lovers of the world, offer collective thanksgivings that Ford has made the very apex of hot hatches into such a life-affirmingly brilliant machine as its Focus RS. 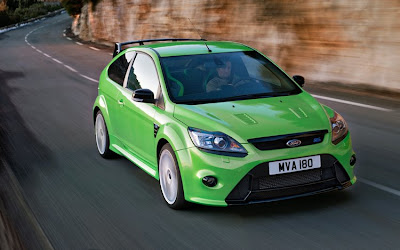 We've covered the engineering before, so let's jump-cut to the way it feels down the road. We're in a second-gear corner, a tight mountain uphill 90-right. We throw the car in, its stability reassuring under the wheel-filling brakes, and feel the high-geared steering take a bite out of the curve. The tire grip is way beyond conventional hot-hatchback levels, but that's not the really astonishing part. The really special part is what comes next, on the exit of the curve.

We squeeze the aluminum throttle pedal and the engine takes a giant lungful, hurling us under the impulsion of the 305-hp, 2.5L five-cylinder motor's 325 lb-ft of torque, available with little lag from well below 3000 rpm. The limited-slip differential does its job of keeping both tires biting, and the patented front suspension geometry suppresses the torque steer. The little Focus just careers out of the bend with startling fairground-ride physicality. As the revs climb to the sound of an intense five-cylinder thrum we grab the next gear and loose off an explosion of waste-gate flutter. Honestly the way it gets its power down, you could almost swear there's AWD at work here.

Fast driving in the Focus RS isn't subtle, but boy is it exhilarating. The combination of comparatively narrow body, upright seating position, brutal traction, low gear ratios and accessible turbo-boosted torque means you can demolish a narrow mountain road with a kind of confidence that would leave most supercars and their drivers in your dust.

Your confidence comes from the simply amazing handling. Even with such a pointy turn-in, all four tires share the workload mid-bend. At full lateral g, if the ESP's off, you can back off and get a beautifully progressive and catchable loosening of the tail. With the ESP switched on, throttle-steering games are still there to be played.

So much for the curves. Even in a straight line, the performance is pretty wild for a hatch. The boost starts at little over 2000 rpm and by 3000 lag isn't an issue. The management allows 7000 rpm for a three-second burst, but actually the gears are closely enough stacked that you have no need to go there except for the mad joy of it. The trick is to change up early and flow on the torque curve - at high revs the throttle resoponse, especially to a lift, is almost too brutal.

From rest you can hit 62 mph in 5.9 seconds, and that's a conservative European figure, measured with no drag-strip one-foot rollout. Top speed is a claimed 164 mph, and remember, this isn't a low-drag slipstreamer: Ford says it's a high 0.38Cd, for zero lift.

You're clamped by the bolsters of a near-race-style Recaro bucket seat, and you in turn are obliged to keep a tight grip of the steering wheel. The patent front suspension uses a pivoted hub to try to reduce the rotational leverage imposed by the tire contact patches on the steering axis, and thereby lowers the torque-steer force. It does a good job, reducing but definitely not eliminating the fight of the steering wheel as you accelerate on non-smooth roads. With so much torque available, any better than that would need magic. But the RS has better steering manners than a MazdaSpeed3 while generating performance and grip in another league.

As a full-on crazymobile then, the RS hits the mark perfectly. But here's another surprise. You can live with it too. Its ride is no more rugged than, say, a sports-suspended Audi A3. None of the control efforts is high, and tire and wind noise are properly suppressed. No, the cabin material quality isn't as satisfying as a Volkswagen GTI, but it's a league ahead of the Imprezas and Evos of this world. The huge front seats don't cut into rear-seat space or visibility much. It runs 12,000-mile oil changes.

Of course it will not have escaped your notice that this is the European Focus, and as such is unsupported by Ford for sale or use in the United States. And the tragedy is there's unlikely to be anything like it when the European and American divisions converge upon a common next-gen Focus from 2010.

We don't yet know whether any European hire fleets will have the Focus RS, but if they do, you should get yourself on the first plane out.
Posted by Pw3680 at 6:53 PM