Before You Buy: How to Size Up Used Cars

In the Market for a Used Car? New Online Database Lets You Do Your Research

By LISA STARK and KATE BARRETT

In July 2003, not long after his high school graduation, Bobby Ellsworth was riding in a friend's pickup in southern California when they struck a car head-on. 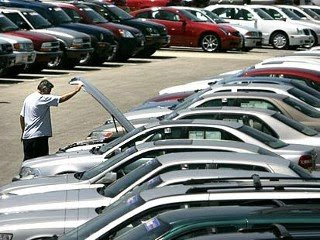 A customer looks under the hood of a car as he shops for a used car in this file photo. A new online database lets customers do research before buying a used car.(Charlie Riedel/AP Photo)

The 1998 Dodge Dakota truck's airbags did not deploy as expected. Instead, useless paper towels had been stuffed into the airbags. Ellsworth, sitting in the front passenger seat, died at the scene.

Not until after the tragedy did those involved learn the used truck had previously been totaled after a frontal crash and sold at auction. When the truck was rebuilt, its airbags were never replaced with new ones.

"We found out different emergency personnel on scene -- whether it be sheriff, highway patrol or EMT people -- that they were aghast at the scene because they saw that the airbags in the Dodge Dakota truck had not deployed properly and were in fact stuffed with paper," Bobby's father Bob Ellsworth told ABC News on Friday. "And when I heard that, it was like a knife in my heart knowing that the safety equipment on this Dodge Dakota had not worked and that my son could be alive today if they had."

In fact, there has been no comprehensive way for buyers of used cars to access that information until now.

On Friday a federal database 16 years in the making finally went public to help consumers learn whether the used automobile they're interested in buying has ever been stolen or wrecked. Each year, some 40 to 50 million used cars are sold in the U.S.

"People are surprised that the DMVs don't link up with each other," lawyer Deepak Gupta of the consumer advocacy group Public Citizen told ABC News on Friday. "When you get a title for a car it doesn't mean that that state has verified the information of all the other states. And so there could be a record that makes it very clear in another state that a car is junk and salvage and shouldn't be on the road. But you can get a title in, say, the state of California and it wouldn't reveal that information."

Gupta brought a lawsuit on behalf of Public Citizen, along with Consumers for Auto Reliability and Safety and Consumer Action, that finally spurred the overdue project along.

The new online database allows potential buyers to type in a car's vehicle identification number to check on a used car's record. States, salvage yards and insurance companies will be required to submit information so consumers can access information on a car's past – whether it was damaged in a flood, rebuilt after a wreck or stolen. Law enforcement will also be able to tap into the information to help combat auto theft or fraud.

"We really think there's a shell game that goes on, where criminals will shift states that have weak salvage disclosure laws, and this does hurt consumers," said Ivette Rivera, executive director of legislative affairs for the National Automobile Dealers' Association. "The last thing that a dealer wants is to sell a car that does not have -- that is not safe for the consumer, and so we want the dealer and the consumer to have this information before a car is purchased."

The database could be increasingly necessary as more people may now be turning to the used car market in a dismal economy. Gupta also said that after Hurricane Katrina, many flooded vehicles were resold all over the country without the buyer's knowledge.

The database, called the National Motor Vehicle Title Information System, is long overdue. Congress mandated the resource in 1992, but in part due to pressure from the insurance industry, it has taken court action and 16 years to make it happen.

Still, the resource is not complete.

"This is all built on a 1992 statute, so this was before the Internet," said Rivera. "We think there are a lot of improvements that can be made in terms of making it more timely."

So far, the database only contains information on about two-thirds of the cars in the U.S. More information will be added in the next few months as junkyards and insurers meet their deadlines to enter data.

Information also varies by state. New York and California are still trying to prevent consumers from getting the relevant information. And 10 states still have to implement systems that will allow them to report such data.

Gupta said states like California and New York do submit the information, but then sell the information to consumers on a private market to make money.

"I understand California has a budget crisis right now," Gupta said. "I understand that bureaucrats in state government are concerned about their budget. But that's really putting, it's short-sighted and it's putting short-term revenues above the safety interests of their citizens."

Meanwhile Ellsworth, "devastated and angry" about the loss of his son, hopes the resource will prevent other families from a similar loss.

"What saddens me is if we had been a little more proactive in government and got this up and working sooner, this national database, my son might be here today," he said.

ABC News' Greg McCown contributed to this report.
Posted by Pw3680 at 1:43 AM