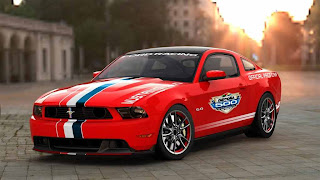 •This will mark the first time in 40 years that a Ford has served as the pace car for ‘The Great American Race,' wîth the last time being in 1970 when a Ford Torino GT convertible did the honors. It is Mustang's first time as pace car for the Daytona 500.

•Fifty special pace car editions of the 2011 Mustang GT will be built and sold to the public.

•The actual Race Red Mustang will be auctioned at the 39th Annual Barrett-Jackson Scottsdale Collector Car Auction on Jan. 23, wîth the help of Richard Petty, the newest member of the Ford Racing family.

For the first time in 40 years, a Ford Motor Company car will be pacing the field for the NASCAR season-opening Daytona 500 when the 2011 Mustang GT, powered by the all-new 5.0-liter V-8 engine, officially starts the race on Feb. 14 at Daytona International Speedway.

'Having the opportunity to pace America's biggest auto race wîth a Ford icon like the 2011 Mustang GT is truly an honor,' said Jamie Allison, director, Ford North America Motorsports. 'And to have the new 5.0-liter engine powering the car will be a great way to demonstrate its power and class-leading fuel economy.' 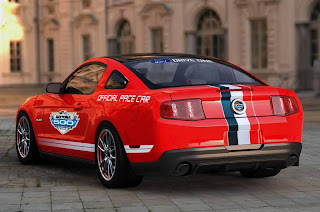 This latest version of Ford's legendary muscle car will be a Race Red glass roof coupe wîth an all-new 5.0-liter V-8 engine capable of producing 412 horsepower, while delivering a class-leading 25 mpg on the highway.

The 2011 Mustang GT Daytona 500 Pace Car model is one of only 50 special editions that will be built and sold to the public.

'Everybody loves Mustang,' Allison continued. 'That was evident last year from the fan reaction when we announced it was going to be our new model in the NASCAR Nationwide Series starting later this year. This is just another way to showcase a true American icon in its most natural environment.'

The last time a Ford served as pace car for the Daytona 500 was 1970 when a Ford Torino GT convertible led the field to the green flag.

And while Mustang may be a rookie when it comes to pacing the Daytona 500, its 45-year history is firmly entrenched in racing and winning championships. Mustang captured championships last year in the Grand-Am KONI and SCCA SPEED World Challenge, in addition to leading Robert Hight to his first NHRA Funny Car championship.

Another element that makes this year's pace car even more unique is that it will be auctioned off for charity before the actual race. Later this week (Jan. 23), the Mustang GT Daytona 500 Pace Car will be offered at the annual Barrett-Jackson Scottsdale Collector Car Auction, which is taking place in Scottsdale, Ariz. Seven-time Daytona 500 champion Richard Petty, the newest member of the Ford Racing family, will be on site to help hand over the car to the winning bidder.

All proceeds over the manufacturer's suggested retail price from the pace car auction will go to help cure childhood diabetes through a donation to the Juvenile Diabetes Research Foundation.

•Ford's new 2011 Mustang GT Glass Roof Coupe wîth an all-new 5.0-liter V-8 under the hood will be the Official Pace Car for the 52nd Daytona 500 on Feb. 14, the first time in 40 years a Ford vehicle has paced this prestigious race
•The Race Red Mustang will be auctioned prior to the race at the 39th Annual Barrett-Jackson Scottsdale Collector Car Auction on Jan. 23; all proceeds from the car over MSRP will benefit the Juvenile Diabetes Research Foundation (JDRF)
•The Mustang pace car features a special Daytona 500 paint scheme, a Ford Racing suspension, strut tower brace and mufflers, unique painted wheels and a special interior treatment, including lit sill plates

Únder the hood of the Mustang GT Glass Roof Coupe will be Ford's all-new 5.0-liter V-8, which will be available to customers in dealer showrooms this spring.

'This is the resurgence of Ford, and pacing the field at the Daytona 500 is a great opportunity to showcase all of the technology that the new 2011 Mustang 5.0 brings to deliver 412 horsepower and projected unsurpassed highway mileage of 25 mpg,' said Mark Fields, president, The Americas.

Before the new Ford Mustang takes to the track, one lucky enthusiast will have the rare opportunity to own the pace car pony and help a deserving charity at the same time.

The Race Red Mustang, which carries a special Daytona 500 striped paint scheme, will be auctioned at the 39th Annual Barrett-Jackson Scottsdale Collector Car Auction on Jan. 23 at WestWorld of Scottsdale, in Scottsdale, Ariz. The event will be televised live on the SPEED channel. All proceeds from the car over MSRP will benefit the Juvenile Diabetes Research Foundation (JDRF), a leader in research leading to a cure for Type 1 diabetes.

'Over the past three years, Ford is proud to have raised more than $2 million for JDRF through the sales of vehicles at Barrett-Jackson,' said Jamie Allison, director, Ford North America Motorsports. 'This year, one lucky bidder will not only experience the thrill of seeing his or her 2011 Mustang pacing the Daytona 500 in front of 43 of the world's greatest race car drivers, but will contribute toward finding a cure for juvenile diabetes at the same time.'

According to Steve Davis, president of Barrett-Jackson, while many collectors have experienced the thrill of buying pace vehicles and historic racers on the Barrett-Jackson auction block, buying a pace car before it hits the track has never happened before at the famed auction house.

'It would be a thrill to own this early VIN, one-of-one 2011 Mustang GT Glass Roof Coupe Daytona 500 Pace Car and watch it lead the famous race in February,' he §äid. 'And knowing that you helped an amazing organization like JDRF would make it even better.'

This is the first time in four decades that a Ford Motor Company vehicle will pace the Daytona 500. The last time was in 1970 when the Ford Torino GT convertible had the honors.

In addition to the special paint, the Mustang pace car features a Brembo brake package, Ford Racing suspension, strut tower brace and mufflers, unique 19-inch painted wheels, summer-only tires and a special interior treatment, including lit sill plates. It also carries an early VIN and will be among the first 2011 Mustang GT 5.0-liter V-8s made available for sale to the public.

2011 Ford Mustang GT: Heritage, high technology and horsepower
The all-new 5.0-liter V-8 engine is the next chapter in the development of the world-class Mustang powertrain portfolio, delivering the performance and fun-to-drive factor that enthusiasts want, while improving fuel economy.

A Brembo brake package upgrade – featuring larger rotors and calipers from the Ford Shelby GT500® Mustang – will be available for serious enthusiasts. Únique 19-inch wheels and summer performance tires also will be offered.

•MyKey™ programmable vehicle key
From the signature 5.0 fender badges to the new engine cover, Mustang GT honors and continues the proud heritage of its predecessors. The speedometer increases to 160 mph, and the tachometer redline advances from 6,500 to 7,000 rpm.

Three vibrant new colors are being added for 2011; along wîth Race Red, these include Yellow Blaze Tri-Coat and Ingot Silver.