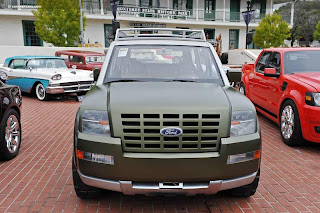 The Ford Explorer nameplate was introduced in 1990 and soon became the industry's best-selling sport utility vehicle. In the decade that followed, sport utility sales had double-digit growth annual, and by 2000, Explorer sales reached 440,000. Ford introduced several special edition Explorers, and one such example was the Sportsman Concept.

The Explorer Sportmans was designed to fulfill the dreams of anglers. It is based on the production 2002 Explorer and outfitted with Scott fly-fishing rods. It is finished in low-gloss, satin metallic green and has satin-finish front and rear chrome skid plates and an integrated hood and grille. The running boards deploy when the doors are opened and also serve as storage for fishing rods and equipment. There is a fully-detachable roof rack, which extends forward and folds down. This allows nets, fishing rods, and other items to easily be loaded from the side. Modular attachments are positioned on the rooftop to carry additional sporting equipment like tents or bicycles. When in a fixed position, the arms of the roof rack swing outward to form a basket for carrying fly-fishing equipment. The bottom of the basket is trimmed with Blondwood slats. There is extensive use of Blondwood, a type common in moist coastal regions of Queensland, New South Wales and Victoria in Australia. 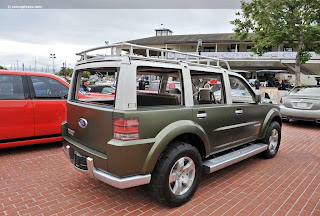 Inside, there is extensive use of pebble-woven leather and Blondwood. There is a GPS screen, and the seatbacks carry packs that fold out for fly-typing. There is a 30-gallon live fish tank with clean-air filter, which locks into place in the rear compartment. It has rollers for easy loading and unloading.

The engine is a 4.6-liter SOHC V8 engine developing 240 horsepower. There is a five-speed automatic transmission with overdrive and four-wheel hydraulic power disc brakes. 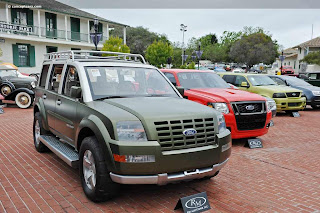 In 2010, this vehicle was offered for sale at the 'Sports & Classics of Monterey' presented by RM Auctions. The car was estimated to sell for $40,000 - $60,000 and offered without reserve. As bidding came to a close, the car had been sold for the sum of $49,500 inclusive of buyer's premium.