Courtesy of a local drug dealer, a sheriff in Michigan is driving a hot new sports car. 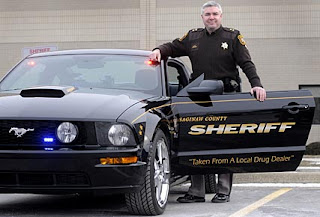 In this photo courtesy of Michigan News, Saginaw County Sheriff William L. Federspiel shows off the decked-out Ford Mustang -- confiscated from a local drug dealer -- that he drives.
Federspiel drives the car to and from work, and he had the words "Taken From a Local Drug Dealer" painted on the door, along with a sheriff's logo.

"I want people to know the drug dealers don't run the town, we do," Federspiel told the Saginaw News. "I want the bad guys to know this will be the end result of what they do."

Federspiel stressed that no taxpayer money was used to convert the car for law enforcement purposes, and he told the newspaper that he hopes to seize more cars for the rest of the county's sheriffs.

"I don't want to buy another vehicle for my command staff," Federspiel said, and he's already got his eye on another imprisoned drug dealer's car, a 2008 black Cadillac Escalade, for one of his men.

Federspiel says he hopes the flashy car will make a point. "The reason I'm going to drive the Mustang is because it stands out, and I want it to stand out," he told the newspaper. "I'm not driving it just to drive it. I'm trying to educate people."