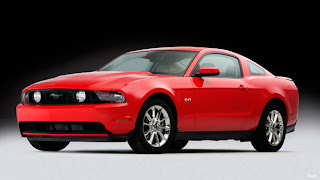 Thirteen months ago at the 2008 Los Angeles Auto Show, Ford introduced their almost all-new 2010 Mustang. Back then, the new 'Stang was a redesigned car that oozed visual chrismal with a brooding face and slick sequential rear turn signals. At the time, Ford didn't have the development dollars necessary to revamp the Mustang's engine line-up along with the car's new exterior and interior.Challengers, eh? 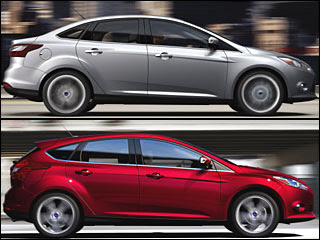 With all the attention Ford has already generated with their all-new, sub-compact 2011 Ford Fiesta, the bigger small-car news coming from Detroit will be the world-debut of the 2012 Ford Focus.

The all-new Focus is an incredibly important new car for Ford Motor Company. It's reported to be a true world car, with major componentry shared with European Focus models. The Focus is one-size larger than the Fiesta and further bolsters Ford's line of cars that is already outselling their trucks by a factor of 3:2.

For cues on what the new Focus might look like, it's based on the C-Max, already introduced in Europe.

Others
There will be more from Ford at the 2010 Detroit Auto Show. The Ford Edge and Lincoln MKX crossover twins are also due for some freshening, and based on our sources at Ford, the MKX will show in Detroit.

Curiously, we've heard nothing about any new Mercury concepts or models for 13 months, so FoMoCo may surprise us with one. Or maybe the news will be of Mercury's demise now that the Lincoln brand is getting stronger.
Posted by Pw3680 at 3:37 AM