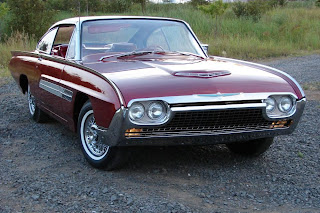 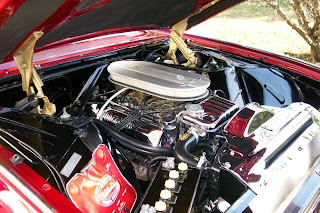 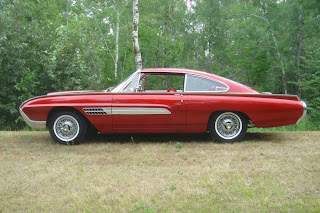 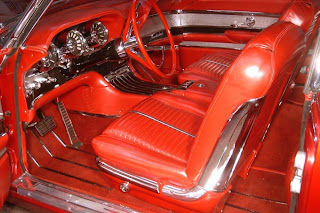 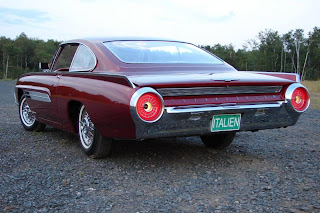 Truly unique in all the world - Presenting the 1963 Thunderbird Italien Concept Car. Departing from the traditional Thunderbird greenhouse, this special 1963 Thunderbird features a new roof line with aerodynamic styling and a customized leather interior with bucket seats front and rear. The Thunderbird Italien was a styling study from Ford's own Thunderbird styling department and was designed by Fords own Thunderbird Stylists who actually built the plywood buck over which they sculpted the clay model of the roof in their own studio and then gave the car to DST where Vince Gardner made the one piece plaster cast over the clay from which he made the fiberglass roof and deck lid. Car designer/builder Vince Gardner constructed the Italien while working for Dearborn Steel Tubing Co., Ford's outsourcing contractor. DST also built the 100 1964 Ford Thunderbolts as well as other Ford non-assembly line concept vehicles. The Italien recently received a complete, original, rotisserie restoration by Duluthian Thunderbird restorer Tom Maruska and was just completed in August 2007. The Italien was a featured in Ford's 1962-63 "Custom Car Caravan" and appeared in Autoramas throughout the United States such as Detroit, Los Angeles, Miami and more. The Italien was featured in 14 magazines in 1963 and 1964 such as "Motor Trend", "Hot Rod", "Car Life", "Motorcade", "Speed and Custom" and others. Copies of all known publications are included with the Italien as well as nearly two years of research data assembled by restorer Tom Maruska. Also included are 3 CDs with hundreds of restoration photos. The Italien also appeared in the 1964 New York Worlds Fair's "Cavalcade of Custom Cars" and was prominently featured in a special World's Fair publication. After appearing in the World's Fair, records from Ford's Jacque Passino's files indicate the Italien was destined for a fate typical of most Ford concept cars -- The crusher. However, in September 1964, the Italien was sold or presented to actor Dale Robertson of TV's "Tales of Wells Fargo", "Wagon Train" and other shows. Around 1986, noted Ford collector Don Chambers purchased the car with the idea of adding it to the auto museum he planned for his retirement. Don became terminally ill and offered the Italien for sale. Thunderbird restorer Tom Maruska purchased it in January 2006 and completely restored the Italien to exacting and documented original specifications. . Recently "Legendary Ford" magazine featured a series covering the restoration of the Italien over five issues culminating with the Italien appearing on the cover of the November/December 2007 issue. This complete series, along with the complete feature series in the "Thunderbird Scoop" magazine, the Vintage Thunderbird Club International magazine, are included with the sale. **TITLED AS A 1962**
Posted by Pw3680 at 3:29 PM