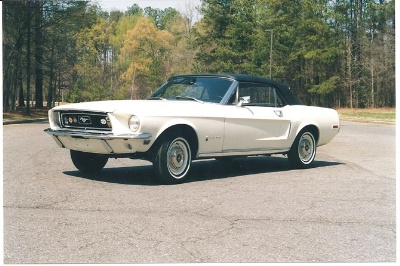 The Ford Mustang debuted in April 1964, and dealers were inundated with orders for the new car. Sales were forecasted around 100,000 units, but on the first day Ford dealers had 22,000 Mustang orders. During the Mustang's first 12 months on the market, sales were a staggering 417,000. Within two years, sales had catapulted to 1 million.

'The Mustang is represented on the Pinehurst Concours d'Elegance show field with a variety body styles and trim levels,' said Pinehurst Concours Director of Competition Brian Barr. 'We have a selection of fantastic Shelby Mustangs as well. One unique example, owned by Rachel Garner, is a 1968 Mustang Convertible that was built for German export. Ford did not have the rights in Germany to use the name Mustang, so it was badged the T5.'

Meanwhile, Porsche introduced the 911Turbo at the 1974 Paris Auto Show. It was the world's first production sports car with exhaust turbocharger and pressure regulator. It was the height of the oil crisis and Porsche produced a super car that was reliable and efficient.

'We have several outstanding examples entreated here at the Pinehurst Concours, including another Porsche Auto Show car,' Barr said. 'In 1975 at New York Auto Show Chuck Goldsborough's Ice Blue example was featured on the display for the U.S. launch.'

Tickets to the 2014 Pinehurst Concours can be purchased at www.pinehurstconcours.com, by calling 910–973-6594 or at the Pinehurst Resort Main Pro Shop, Carolina Hotel or Village of Pinehurst Putter Boy Shop. Tickets will also be available to purchase Saturday evening at the British Invasion Concert in the Village Green, and at the gates Sunday.

The 2014 Pinehurst Concours will kick off a celebrated six-week period at one of the world's top golf resorts, which hosts the 2014 U.S. Open and U.S. Women's Open Championships in consecutive weeks in mid June.

Display cars at the 2014 Pinehurst Concours will include Steve McQueen's 1956 Jaguar XKSS, which was shipped across the country from the Petersen Automotive Museum in Los Angles, and the Best in Show from last year's inaugural Pinehurst Concours, a rare 1938 Steyr 200 Glaser Roadster, is coming from Oil City, Pa.

The weekend begins with the Iron Mike Rally to Fort Bragg for about 50 of the show cars. Residents and business owners along the route, which will include the Village of Pinehurst, then down Highway 2 to Southern Pines, are encouraged to cheer the cars on at 9:45 and 10 a.m. Friday.

On Saturday, the 'Cars and Coffee' Fairway Drive will take place at Pinehurst Resort starting at 9 a.m., while the British Invasion concert begins at 4 p.m. in the Village Green. Both events Saturday are FREE to the public. Concessions will be available at both venues.

Sunday's headliner event, with 119 vintage and rare cars staged at Pinehurst Resort, begins at 9 a.m. to the general public. Tickets are still available at the gate. Weather forecasts for Saturday and Sunday call for sunny skies and temperatures in the high 70's to low 80's.