Cars Made Of Strange Stuff 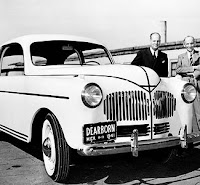 Henry Ford might have had something strange in his pipe when he came up with the idea for this 1941 prototype, which was made of resin-stiffened hemp fiber (what's hemp?). He was so confident of the car's strength; he put it through a remarkable test.

Fuel of the Future

When Henry Ford told a New York Times reporter that ethyl alcohol was "the fuel of the future" in 1925, he was expressing an opinion that was widely shared in the automotive industry. "The fuel of the future is going to come from fruit like that sumach out by the road, or from apples, weeds, sawdust -- almost anything," he said. "There is fuel in every bit of vegetable matter that can be fermented. There's enough alcohol in one year's yield of an acre of potatoes to drive the machinery necessary to cultivate the fields for a hundred years."

Ford recognized the utility of the hemp plant. He constructed a car of resin stiffened hemp fiber, and even ran the car on ethanol made from hemp. Ford knew that hemp could produce vast economic resources if widely cultivated.

Ford's optimistic appraisal of cellulose and crop based ethyl alcohol fuel can be read in several ways. First, it can be seen as an oblique jab at a competitor. General Motors had come to considerable grief that summer of 1925 over another octane boosting fuel called tetra-ethyl lead, and government officials had been quietly in touch with Ford engineers about alternatives to leaded gasoline additives. Secondly, by 1925 the American farms that Ford loved were facing an economic crisis that would later intensify with the depression. Although the causes of the crisis were complex, one possible solution was seen in creating new markets for farm products. With Ford's financial and political backing, the idea of opening up industrial markets for farmers would be translated into a broad movement for scientific research in agriculture that would be labelled "Farm Chemurgy." 2

Why Henry's plans were delayed for more than a half century:

Ethanol has been known as a fuel for many decades. Indeed, when Henry Ford designed the Model T, it was his expectation that ethanol, made from renewable biological materials, would be a major automobile fuel. However, gasoline emerged as the dominant transportation fuel in the early twentieth century because of the ease of operation of gasoline engines with the materials then available for engine construction, a growing supply of cheaper petroleum from oil field discoveries, and intense lobbying by petroleum companies for the federal government to maintain steep alcohol taxes. Many bills proposing a National energy program that made use of Americas vast agricultural resources (for fuel production) were killed by smear campaigns launched by vested petroleum interests. One noteworthy claim put forth by petrol companies was that the U.S. government's plans "robbed taxpayers to make farmers rich".

Gasoline had many disadvantages as an automotive resource. The "new" fuel had a lower octane rating than ethanol, was much more toxic (particularly when blended with tetra-ethyl lead and other compounds to enhance octane), generally more dangerous, and contained threatening air pollutants. Petroleum was more likely to explode and burn accidentally, gum would form on storage surfaces and carbon deposits would form in combustion chambers of engines. Pipelines were needed for distribution from "area found" to "area needed". Petroleum was much more physically and chemically diverse than ethanol, necessitating complex refining procedures to ensure the manufacture of a consistent "gasoline" product.

However, despite these environmental flaws, fuels made from petroleum have dominated automobile transportation for the past three-quarters of a century. There are two key reasons: First, cost per kilometer of travel has been virtually the sole selection criteria. Second, the large investments made by the oil and auto industries in physical capital, human skills and technology make the entry of a new cost-competitive industry difficult.

Until very recently, environmental concerns have been largely ignored. All of that is finally changing as consumers demand fuels such as ethanol, which are much better for the environment and human health. 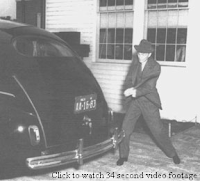 Henry Ford takes a whack at the automobile which he
"grew from the soil." This 1930s marvel withstood the
impact of a sledgehammer and in retrospect was the
first 'green' car made in America, manufactured using
resonated plant fiber and powered with hemp biofuels.
Other attributes of the vehicle, as reported by the article
in Popular Mechanics, included a steel tubular frame
which was 2/3 lighter than a steel counterpart and the
use of soybeans and other organic matter throughout.

Ford's home-grown creation was first featured in the
February 1941 edition of Popular Mechanics and was
expected to best any automobile being manufactured
at that time. The only thing that could stop Ford from
succeeding, did; Prohibition on the very hemp he used.

Ford's dream came to an end resulting from legislation
when Congress enacted The Marihuana Tax Act of 1937.
Though it was intended to control and tax marijuana,
the legislation made it impossible for citizens to follow
and hemp and marijuana have been illegal ever since.