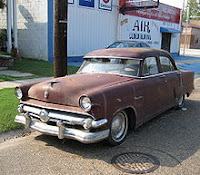 The Ford Mainline is an automobile which was produced by the Ford Motor Company in the United States in the models years 1952 to 1956. It was introduced as the base trim level of the 1952 Ford range below the Customline and Crestline models. The Mainline retained its position in the redesigned 1955 Ford range but was dropped for the 1957 model year when the Ford Custom became the new base model.

The Mainline was offered in 2 door sedan, 4 door sedan, 2 door coupe and 2 door station wagon body styles. The station wagon was marketed as the Mainline Ranch Wagon until it lost its Mainline tag for the 1955 model year when all Ford wagons were moved to their own series. Mainlines were available with both inline six cylinder and V8 engines. 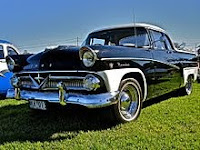 In Australia the Mainline name was applied to a locally developed 2 door coupé utility version of the Ford Customline sedan from 1952. The Mainline utilized an imported Ford V8 convertible chassis with an added cross member for additional load carrying strength. It sold alongside the Australian built Customline sedan, with both given yearly updates until production ceased in 1959. The Mainline Utility were powered by an Australian produced version of the Ford side valve V8 engine until the introduction of the OHV V8 in the redesigned 1955 series.