You can thank motivational management techiques for the original Mustang design, abetted by a shrewd chief designer, Joe Oros. Oros first worked for GM in the 1930s and early 1940s, then joined the independent George Walker group that shaped the vital all-new 1949 Ford and the cars and trucks that built on its timely success. When Walker became Ford's in-house design vice president in 1955, he made Oros an assistant, then named him to head the Ford Studio in 1956.

Though Oros would supervise the design of almost every U.S. Ford-brand vehicle over the next dozen years, the Mustang was undoubtedly his biggest success as studio chief. Ironic, then, that his team's winning design was something of a rush job, just like that '49 Ford. Here, in his own words, is how Oros remembers the birth of the 1965 Ford Mustang prototype.

Lee Iacocca wanted a car that was more of a personalized, sporty four-seater rather than a tight, European 2+2 package. Gene Bordinat requested proposals for it from our Ford studio, Lincoln-Mercury [and Corporate Advanced]. 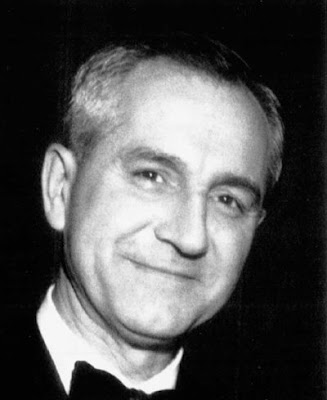 As chief of the Ford Studio, Joe Oros oversaw the design of the early Mustang.

The request came through on a Monday, and I had gone off to a one-week seminar: training sessions on problem analysis and problem-solving methods. Dave Ash was my executive. On Tuesday I called him to find out how things are going, and he told me about the new assignment. Ash had already made some sketches, and my understanding was that the studio was rapidly putting together a clay model for me to see the following Monday. I could hardly wait. I had difficulty concentrating on the seminar.

The following Monday, I went to the Design building very early and hot-trotted down to the Ford studio. And there was this car with a low mouth-type front end, a bumper integral with the grille opening, and a greenhouse with a reverse backlight like those on recent Lincolns, Mercurys, and the British Ford Anglia.

I thought, "We can't use a reverse backlight if this car is supposed to be new. And the front end is going to be expensive and add weight." The bodysides were not new and exciting either. So I didn't think we would win all the marbles against the other studios. Then the designers started trickling in, and I asked Gale Halderman and John Foster, two managers working under Ash, "What happened here?" They said, "It's what Dave wanted to start with." Then Dave walks in and I said, "Please cover this model."

Chief designer Joe Oros and his team were rushing to complete a design that would become in the prototype for the 1965 Ford Mustang. This is how Oros remembers it:

I then called a meeting with all the Ford studio designers, including the truck designers. We talked about the sporty car for most of that afternoon, setting parameters for what it should look like -- and what it should not look like -- by making lists on a large pad, a technique I adapted from the management seminar. We taped the lists up all around the studio to keep ourselves on track. We also had photographs of all the previous sporty cars that had been done in the Corporate Advanced studio as a guide to themes or ideas that were tired or not acceptable to management. 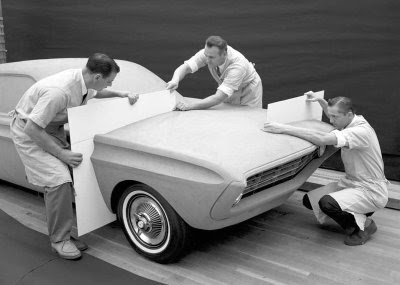 Engineers use a series of templates to transfer body surfaces from a clay model to production tooling.

Within a week we had hammered out a new design. We cut templates and fitted them to the clay model that had been started. We cut right into it, adding or deleting clay to accommodate our new theme, so it wasn't like starting all over. But we knew Lincoln-Mercury would have two models. And Advanced would have five, some they had previously shown and modified, plus a couple extras. But we would only have one model because Ford studio had a production schedule for a good many facelifts and other projects. We couldn't afford the manpower, but we made up for lost time by working around the clock so our model would be ready for the management review.

It took us another two weeks or so to finish it. Lee Iacocca first saw it when it was about five-eighths to three-quarters complete. I met him at the studio door and talked with him about what we were trying to accomplish. I could tell he was really pleased with the concept we were on, but he was noncommittal. Still, our car won hands-down. And we did it in under three weeks' time.

I guided the overall appearance, especially the front end, but Dave Ash, Gale Halderman, and John Foster did an outstanding job in guiding the Mustang's development with the various committees that came through the studio -- manufacturing, engineering, product planning. Charlie Phaneuf, another manager with a lot of ideas, also helped tremendously, as did the interior studio headed by Damon Woods. It was a tremendous all-around effort that shows what teamwork can do when properly coordinated.

Interestingly enough, the car fell together naturally as a design theme. It wasn't forced. Engineering development came together very well. We were always conscious of the packaging requirements, the manufacturing requirements as far as feasibility. From approval to the showroom floor, we only had to make minor adjustments.

When Lee Iacocca saw our finished car, he just rolled his cigar in his mouth. I could see the gleam in his eye, and he was pleased as punch. Of course, that made me feel very good too.
Posted by Pw3680 at 2:17 AM