From 1920 to 1929, the Ford Company grew with new products and acquisitions, including several new and well-received Ford trucks and tractors.

Though Model Ts were becoming dated by the early Twenties, people continued to buy them in record numbers. One reason was that Henry Ford kept lowering their cost; from a starting price of $550 in 1920, one could be had for as little as $260 by 1925. But even low prices won't sell a product forever, and competitors were making inroads by offering features not available on the Model T.

Production was up, but sales down for Ford cars and trucks in the 1920s. 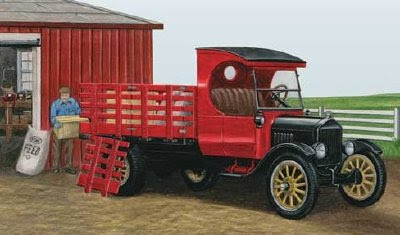 Nevertheless, Ford car and truck production set new records during 1920, and Henry kept expanding facilities at the River Rouge Complex. Though these were positive points for the Ford Motor Company, not everything was rosy from a financial standpoint. Production was up, but sales were down by a substantial margin, which affected the amount of money coming into the company's coffers.

As a result, Ford shut down its plants and shipped cars and trucks to dealers even though they had not ordered them. And those dealers had to pay for those vehicles on delivery and not when they were sold to customers. Dealers were not happy with this situation, but were forced to accept it if they wanted to maintain their Ford franchise.

The early Twenties were a time of expansion and innovation for Ford, despite some financial and organizational challenges. Learn about Ford trucks from 1920-1923 in the next section.

Ford set new production records for Ford trucks and Ford cars from 1920 to 1923. The company also saw changes in its corporate landscape, and in the marketplace overall. 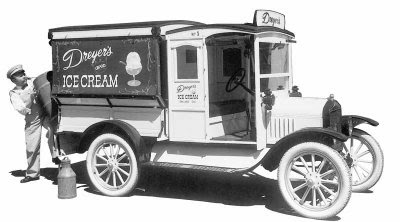 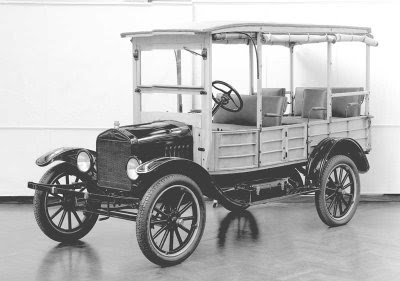 A 1920 Depot Hack is fitted with the demountable rims that became available on a broader range of vehicles that year. The rims allowed for easier flat repair, as the outer rim -- which held the tire -- could be separated from the wheel hub, which remained on the vehicle.

Nineteen twenty-one was a year of mixed results for the Ford Motor Company and Ford trucks. In May the company celebrated the production of its five-millionth Model T, but this good news was offset by the defection of Ford's brilliant production boss, William Knudsen, to Chevrolet. It was largely due to this move that Chevrolet became an automotive juggernaut, passing Ford on the sales charts by the end of the decade.

Another bit of negative news that year was that Dodge Brothers, Inc., an up-and-coming rival, signed an agreement with the Graham Brothers Truck Company to become the sole distributor of that brand. Later in the decade, Dodge would absorb Graham to become another serious competitor to Ford.

Things looked a little better for the Ford Motor Company in 1922. A new blast furnace was dedicated at the River Rouge Complex, and production of the Fordson tractor at this facility set a new record. Henry Ford also expanded his company's holdings by purchasing the assets of the Lincoln Motor Company for $8 million in 1922 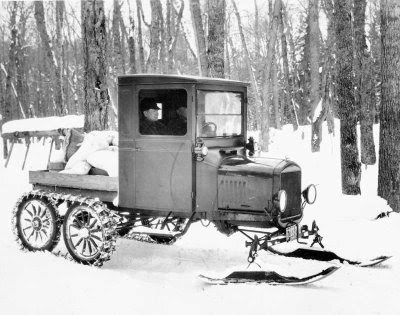 Ford Model T turned into a truck, in turn converted into a snowmobile.

For 1923, Ford updated the look of the Model T cars and Model TT trucks, and total production of these vehicles topped 1.8 million units for the year. 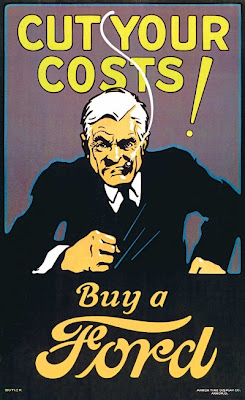 One of Ford's 1923 ads carried a simple message: A Ford cost less to buy and drive than virtually any other car, and businesses would do well to adopt them. Since Ford's sales and profits soared during this period, perhaps the advertising did its job, but it's hard to imagine such a dour-faced spokesman being used today.

In 1924, Ford made big changes to the ways in which it built its trucks. Read about them in the next section.

Ford trucks underwent important changes in 1924. Prior to 1924, Henry Ford sold his Model TT trucks as rolling chassis, leaving the body business to aftermarket companies. This attitude changed that year when Ford's first factory-catalogued truck was offered as the Model TT with Express (pickup) Body. 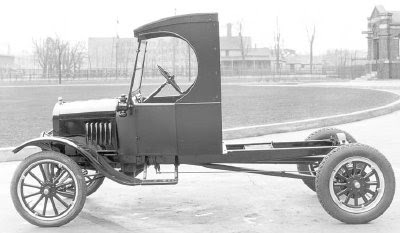 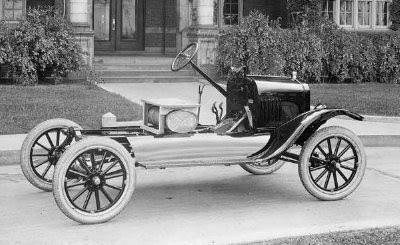 For light-duty use, a Model T chassis was still available. Note the oval-shaped fuel tank that was fitted to Model Ts beginning in the early 1920s. 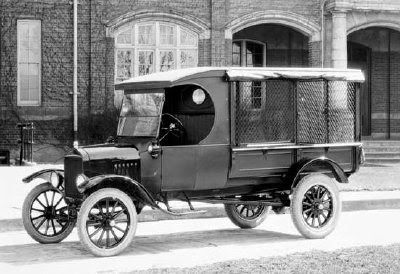 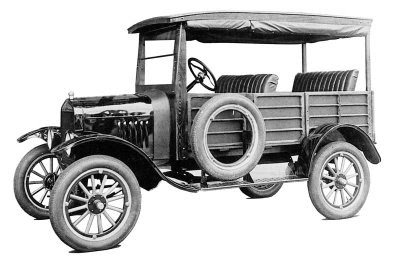 A canopy top covers the wood-panel body of this Ford Model T passenger vehicle. The side-mounted spare tire is fitted to a demountable rim. 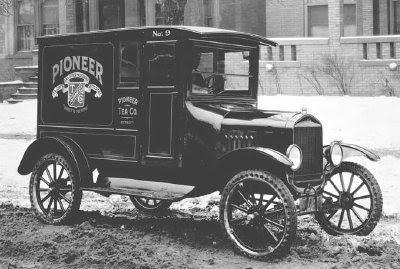 A 1924 Model T with panel body shows off that year's styling changes, which included a taller radiator and hood. It was owned by the Pioneer Tea Co. of Detroit.

Ford truck bodies again evolved in 1925. Read about 1925 Ford trucks in the next section.

In 1925, a new Ford truck production record -- more than 270,000 units -- was set. Ford company also built its 12-millionth vehicle that year, and opened its first plant in Mexico. And William Clay Ford, Henry's third grandson, was born in 1925. 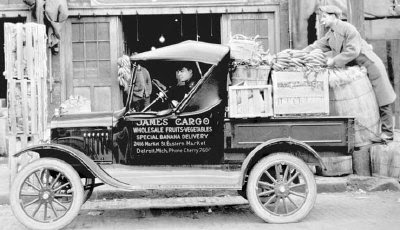 Ford's first real pickup truck was introduced for 1925: a Model T Runabout with pickup body. This example is shown carrying a weighty load of bananas. 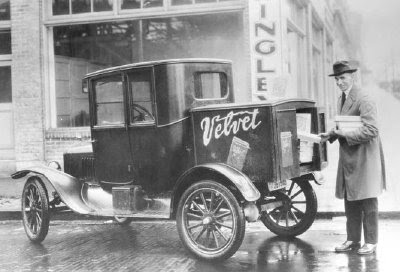 A Model T coupe is fitted with a large box trunk, perfect for delivering small items. 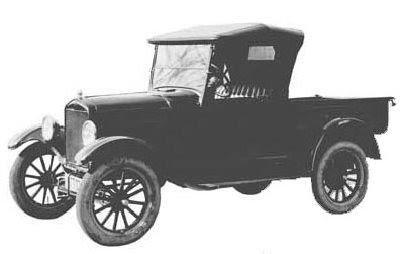 In a "radical" restyle for 1926, Ford Model Ts got a taller hood that flowed straight into the cowl, as shown on this Ford Runabout pickup.

The end of an era came when Ford ended Model T production in 1927. Learn about this important period for Ford trucks in the next section.

In order to stimulate sales of the decidedly old-fashioned Model T, 1926 brought an option to Henry's famous "Any color as long as it's black" dictum that originated in 1914, with available hues of grey, green, and maroon. 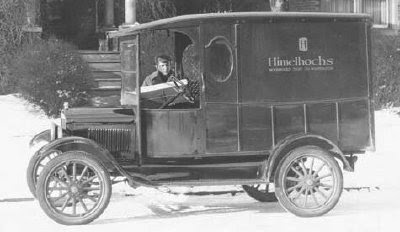 Despite the fact Ford now offered its own truck bodies, outside manufacturers continued to sell special-purpose varieties, such as this panel delivery fitted to a 1926 Model T chassis.

But the writing was on the wall. The Ford Model T had outlived its usefulness, and shortly after building the 15-millionth copy in May 1927, production finally ground to a halt. 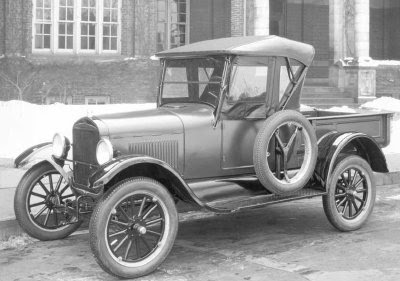 This 1927 Ford Model T Runabout pickup shows off the newly available two-tone color scheme, which always left the fenders and running boards in black. It proved to be among the last Model Ts made, as production ceased in spring 1927, after more than 15 million had been built.

The factory shutdown, however, was only temporary; Ford had an all-new design waiting in the wings. And what rolled out of plants later that year would make contemporary buyers forget all about the old "Tin Lizzie."

That new Ford, called the Model A, was introduced to the public on December 2, 1927. It was followed shortly thereafter by the Model AA trucks, and both were a hit with buyers.

Ford had a hit with the stylish and powerful Ford Model A car and Model AA truck. Read about these 1928 and 1929 Ford trucks in the next section.

More stylish than the Model Ts and TTs they replaced, the new Ford Model A cars and Ford Model AA trucks came with more standard equipment, a more powerful engine, and an easier-to-use transmission. So advanced and price-competitive were these vehicles that they became the hit of the 1928 model year. 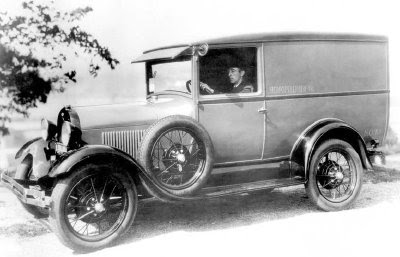 Ford replaced the venerable Model T in 1928 with the completely new Model A. Like its predecessor, the A formed the basis for a truck chassis, the AA, which was rated at 11/2 tons vs. 1 ton for the Model TT. The company's first panel-truck bodies also arrived that year and could be fitted to either the A or AA chassis; it's shown here on the former. 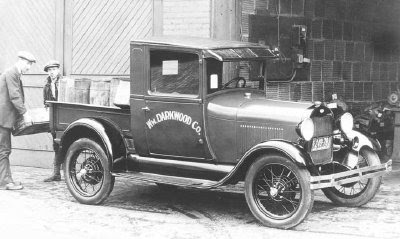 Among the Ford Model A truck offerings was this closed-cab pickup. Both the A and AA carried a 200-cubic-inch four-cylinder engine producing 40 horsepower -- twice that of the Model T's 177-cid four -- along with a sliding-gear three-speed transmission.

Ford trumped the industry again in 1929 when it introduced a new factory-built light-duty model: the wood-bodied Station Wagon.

But few events -- automotive or otherwise -- could match what was about to take place. For on October 29, thereafter referred to as "Black Tuesday," the nation's financial well-being would be dealt a serious blow as the stock market began to crash, triggering the Great Depression. 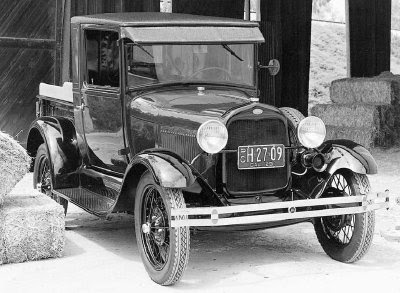 As might be expected, the 1929 Model B changed little after its 1928 redesign -- and it didn't need to; for the first time in three years, Ford topped Chevrolet in sales. This closed-cab pickup sold for $475.

For about $30 less, buyers could get a Ford Model A pickup with an open cab.

With its innovations and ideas, Ford made a lasting impact on the automotive world during the 1920s. As the nation entered the Great Depression, Ford trucks and Ford cars would continue to innovate, offering the nation's car buyers a quality product at a quality price.
Posted by Pw3680 at 8:37 PM

Thousands of used truck parts for sale from truck traders and operators at trucklocator. All makes and models of lorries-find tippers, tractor units and rigids for sale in the UK